"The new Lost Vs Damned mode plays out the oft-told story of the righteous versus the vulgar, this time pitting Angels against Devils in the ultimate battle of the soul. Each match will flip between day and night for 60 seconds at a clip, with advantages including regenerated Armor and Health and improved weapon options depending on the time – day for the Angels and night for the Devils. Points are awarded for kills during the time your team is powerful, so seizing these opportunities are truly the difference between life and death."
— Rockstar Newswire description.

Lost Vs Damned[1] is an Adversary Mode featured in Grand Theft Auto Online as part of the continuation of the Bikers update, released on October 28, 2016, during the Vortex and Sanctus Week event.

"Day and night deathmatch between forces of good and evil."
―In-game description.

The mode is essentially a variation of team deathmatch, where players are distributed in two teams: the Angels and the Demons. The Angels wear white clothing and "Cupid" masks, while the Demons wear red clothing and "Red Monster" masks.

Each 60 seconds, the time will cycle between day and night. At day, the Angels have access to different weapons and are able to score points by killing a Demon, while the Demons are only equipped with a Machete, but if they kill an enemy player, the Angels team loses a point. At night, their roles are switched and the Demons can score points, while the Angels can make them lose a point by killing them with their Machetes. This will repeat until the match ends.

The arsenal is only given to the team who is favored by the time cycle (angels at day, devils at night).

The other team gets a Machete. 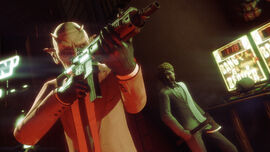 Retrieved from "https://gta.fandom.com/wiki/Lost_Vs_Damned?oldid=1170171"
Community content is available under CC-BY-SA unless otherwise noted.