In-game time
“There's a new iFruit phone to come out, rumors of another war in the middle east, more starvation in Africa, but here I am, sitting in my trailer, wondering who's gonna do something about the Lost's new crystal factory on the other side of the Alamo Sea!! What? You are? Well, get to it and bring the crank to my yard!!”
— Description

Lost My Mind is mission in Grand Theft Auto Online given to the player by Trevor Philips. It is available for up to 4 players.

Trevor knows that The Lost MC has a new crystal meth lab in Galilee, just across the Alamo Sea. Considering them competition, Trevor orders the team to go there, eliminate The Lost MC members, and steal the meth. On arrival they find that The Lost MC has extensively manned the area. It is far easier to climb over the trailers to eliminate them rather than facing them all head on. Once the majority of the bikers have been killed one of the remaining bikers will either attempt to flee on foot, escape with a car or escape on a Seashark with the meth. The team needs to kill him and then collect the meth. More bikers will chase after the team once the meth is collected, in an attempt to take back their drugs. The team must to get the meth to Trevor's trailer to complete the mission. 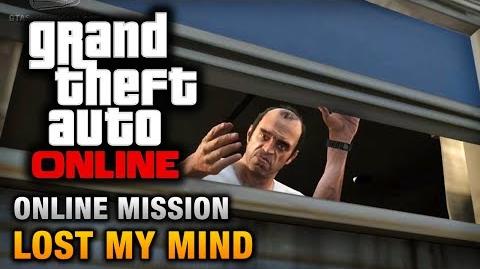