22
“A'ight, so I got something for you. They some Lost dudes up at the graveyard rabble rousing or whatever they call it. Some of the OGs been wanting'em gone a while now, and this our chance to get'em all at once. Go to the spot and take the bikers down, there will be some snaps in it for you for sure. The OGs ain't got a rep for generosity, but in this case they goin' make an exception.”
— Description.

Lost MC RIP is a mission in Grand Theft Auto Online given to the player by Lamar Davis. It is available for up to 2 players.

Like Gerald and Trevor, Lamar has now adopted negative views of The Lost. The Lost MC are having a meeting, which Lamar says is rousing at the Hill Valley Church cemetery in Pacific Bluffs. Lamar orders the team to head there and eliminate them all; an act of revenge against The Lost for the brawls against he and Gerald. Once the team arrives at the cemetery, they will need to take them all out, taking cover at graves or the several walls in the cemetery. The Lost will be carrying a substantial amount of money and weaponry, which the player can take. 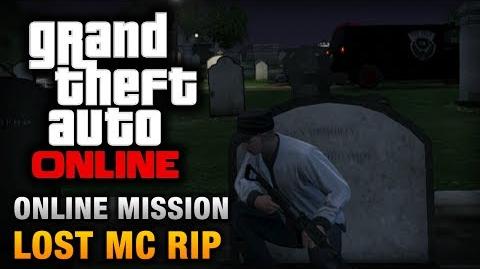