The Lost MC Lady is a character in the Grand Theft Auto series who appears as a minor character in The Lost and Damned.

Nothing is known about her, other than the fact that she is a member of The Lost MC.

The woman is first seen during the mission Clean and Serene, where accompanies the main members of The Lost Brotherhood from the clubhouse door to their motorcycles.

She is later seen in Angels in America sitting on Billy Grey's lap while he celebrated his release from rehab alongside his brothers.

Artwork of the Lost MC Lady.

The girl walks from the Lost MC Clubhouse, along with Clay Simons and Jason Michaels. 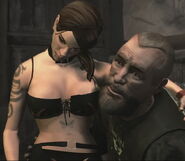 The girl with Billy Grey.
Add a photo to this gallery

Retrieved from "https://gta.fandom.com/wiki/Lost_MC_Lady?oldid=1176054"
Community content is available under CC-BY-SA unless otherwise noted.