The Los Santos Vagos (a.k.a Northside Vagos, Northerners, LSV, or just the Vagos) are a street gang featured in Grand Theft Auto: San Andreas. They are the tertiary main antagonistic group in the game, the first two being the CRASH and the Ballas.

The history of the Vagos is shrouded in mystery, as well as many of the events surrounding the gang, though they probably started forming simultaneously in relation to the other Los Santos gangs during the 1970s and 1980s.

The Vagos are based in the eastern and northeastern neighborhoods of Los Santos, which are historically majority-populated by the Chicano (Mexican-American) community. Incoming immigration from Mexico and other Latin American countries increased the population of the area, and it can be assumed that the deprivation of the area, as well as cynical attitudes towards law enforcement allowed the gang to form and flourish.

Prior to 1992, they also controlled northern East Los Santos. This is evidenced by CJ's reaction to OG Loc directing CJ to northern East Los Santos to find and kill Freddy during the mission OG Loc. CJ states, "Ain't this Vagos' hood?". This is due to CJ being away from Los Santos for five years and not understanding the current gang situation. During 1992, the area is actually controlled by the Ballas instead, although the radio mentions that the Vagos are in a war with the Aztecas in East Los Santos. Additionally, a Vagos gang house remains in the area and is destroyed during the mission Burning Desire.

Since north East Los Santos was once part of Vagos territory before falling under Ballas control in 1992, there must have been either a gang war or a diplomatic agreement between the Ballas and the Vagos at some point.

The start of, as well as their reasons for their rivalries with the Aztecas, Families, and Ballas are unknown. It is likely that hostilities naturally developed due to territorial expansion. Their hostilities towards the Grove Street Families has increased over the years due to their involvement in the crack trade and the weakening of the Families - which the Vagos see as an opportunity to increase their influence.

The Los Santos Vagos are the largest and most powerful Mexican/Latino street gang based in Los Santos and the 2nd most powerful overall gang at the beginning of the events in San Andreas. They are predominant within the poorer and more run-down neighborhoods in the far east and northeast of the city.

They are fierce rivals of the other Los Santos Mexican gang, the Varrios Los Aztecas, and are also enemies with the Grove Street Families and the Ballas. They're affiliated with the San Fierro Rifa, who were former enemies until the Rifa joined the narcotics business. The Vagos are also affiliated with the the Loco Syndicate for narcotics, and C.R.A.S.H. for street intelligence. Despite reacting with hostilities to the Ballas on the streets, high-ranking members of the Vagos and the Ballas work together in the crack-cocaine trade while providing protection for Big Smoke's cocaine empire. LSV members include drug-dealer Big Poppa and ex-convict Freddy.

There are three different Vago skins that walk and drive around their territories.

The Vagos are known to be extremely violent and will often attack in very large groups from numerous directions in an attempt to swarm and flank their enemies as part of their strategy. Most of their territory consists of close-quarter areas with numerous alleyways and shortcuts which aids them to do this. The Vagos are involved in gang-banging, street violence, murder, gang-related homicide, gang warfare, drug trafficking/manufacturing (especially the crack cocaine trade) and vandalism.

The Vagos appear to be the least armed gang in Los Santos, evidenced by the fact that members only carry the pistol. However, at the same time - they are one of the largest - and they use their size to their advantage. This contrasts to their primary enemy - the Varrios Los Aztecas, which function in the complete opposite way - they are the smallest but the most heavily armed. This puts the Aztecas and Vagos on equal footing in terms of power. However, the Vagos are equipped with better firepower during some missions and gang wars.

Members are often seen drinking beer and smoking marijuana while hanging in groups. They are easily identifiable by their yellow bandanas in addition to 90's "cholo" style clothing. Vagos will also often flash Vago gang handsigns. Many members are often heavily tattooed with gang tattoos as part of their unique identity. On the streets, they are either unarmed or carry the 9mm pistol. During a gang war, they carry the Micro SMG, Baseball bat, SMG, AK47, and the 9mm pistol.

Upon spotting a Balla, Grove, or Azteca on their territory - they will often get into a violent confrontation (especially if Aztecas). They will also usually get into a violent confrontation upon spotting the player walking or driving around their territory and will sometimes question CJ's gang-banging status, and regardless if the player chooses to respond negatively or positively, the Vagos will follow him and most likely attack.

The Vagos pose a threat to Grand Theft Auto: San Andreas protagonist Carl Johnson, and will taunt and attack him, if they see him. (However, in the beginning of the game, they are neutral to him unless provoked.) The Vagos are also one of two gangs (the other been the Ballas) that will attack GSF territory upon completion of the mission Doberman.

The Vagos' first appearance in the storyline was during the mission Catalyst, in which the Vagos, Ballas and Grove Street Families are tipped off by CRASH about an ammunitions train. This mission sees Carl and Ryder stealing weaponry and ammunition from the train, and having to kill a number of Vagos and Ballas gang members to get them.

During the OG Loc mission, Carl and OG Loc chase Vagos gang member Freddy across parts of Los Santos before being confronted by more Vagos gang members (whom are all killed). Later, Big Smoke appears to be having problems with the Vagos gang, and along with Carl, meet two Vagos drug dealers, who have Smoke's drugs, in the mission Running Dog. After failing to hand the drugs back to Smoke, one is injured after Smoke sneaks up from behind and swings at the Vagos gangster with a baseball bat and the other is chased down and killed by Carl.

In the mission Wrong Side of the Tracks, Smoke hears from Frank Tenpenny that the Vagos are meeting some San Fierro Rifa and cutting some kind of deal. At Unity Station, four Vagos gang members jump onto the train after just leaving the station, and are chased and killed by Smoke and Carl. Officer Tenpenny also has issues with the Vagos, and sends Carl to burn down a Vagos gang house in East Los Santos in the mission Burning Desire.

The Vagos eventually gain the territories of the Varrios Los Aztecas upon completion of the mission The Green Sabre, which includes El Corona, Little Mexico, and Unity Station due to the increasing drug influence and attacks, causing the Aztecas to dissolve. Carl and Cesar later realize that the Vagos, Rifa, Ballas and Russian Mafia are affiliated with Big Smoke to influence crack distribution in Los Santos.

The Vagos are hired by Big Smoke (along with the Rifa, Russian Mafia and Ballas) for protection/security and as drug dealers for his cocaine empire. This is the only situation in the game where the Ballas and Vagos collaborate with each other due to the money interest - despite being natural enemies on the streets. It is likely that only the higher-ranking OG's of the Ballas and Vagos collaborate with Big Smoke.

High-ranking Vagos member and powerful drug dealer Big Poppa is also able to buy out the mansion of washed-up rapper Madd Dogg. The mansion then becomes a front and hang-out for the Vagos. In the game's storyline (in the mission A Home in the Hills), CJ and the San Fierro Triads storm the mansion, Kill Big Poppa, and reclaim the mansion for Madd Dogg.

The Vagos remain in the Aztecas territories until Carl and Cesar return to Los Santos, and they reclaim El Corona, Little Mexico, and Unity Station as Aztecas territory in the mission Los Desperados in a large gang war.

Upon the destruction of Big Smoke's Crack Palace/empire and the death of Big Smoke, the Vagos lose a lot of drug influence on the streets. If the player chooses, it is possible to take over all of their territories in Los Santos as part of the gang-war mini-game, thus ending the Vagos gang for good, and they will never appear in the game again or attack GSF territory.

The Vagos drive three different classic cars, the 2-door Hermes and Tornado, and the 4-door Oceanic. If a player angers the gang to the point of pursuit (during gang wars, for example), they will always give chase in the Oceanic, due to it being their only vehicle capable of holding four members. Although the Tornado appears considerably often throughout the game, it will spawn much less frequently when all Vagos territories have been captured, the best solution is storing one before this occurs. They also seem to be a larger volume of Vagos cars on the streets than any other gang, making attacks on members difficult. The favourite radio stations of the Vagos is K-DST and Master Sounds 98.3 . 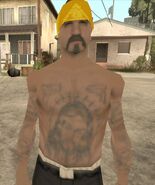 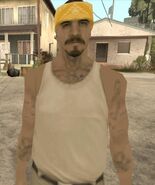 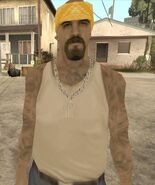 A group of Vagos.

The Vagos in an early screenshot.

Several Vagos in their territory of East Beach

The territories of Los Vagos prior to Gang Warfare in GTA San Andreas.