“Los Santos Transit owns and operates the public transit system that none of its city's inhabitants actually use.”
— Description at Bawsaq.com.

Los Santos Transit is the transportation authority network in Los Santos, San Andreas in Grand Theft Auto V. The player can buy stocks from them at the Bawsaq.com website.

The Bullet is the name of the bus network in Los Santos. There are four colours of buses: blue, red, orange and turquoise. They can be found around the city and all of them have Downtown LS, as their destination; according to their overhead sign.

The bus system extends out of Los Santos as far as Paleto Bay, as seen in the Paleto Score Setup where Lester arrives on an LST bus from Los Santos. However, outside of this mission, LST buses cannot be seen in Paleto Bay. Another bus can be found in Sandy Shores during the mission Caida Libre, but then again, it cannot be found in there after the mission is finished.

“Los Santos isn't famed for its public transport but, since all the locals refuse to use the Arrow subway system, at least it's quiet!”
— GTAV The Manual description

The Arrow is the name of Los Santos' only light rail line. The line has 11 stations and expands through most of the largest neighborhoods in Los Santos and the incorporated city of Davis. The system is both overground and underground. The trains are based on the real-life Siemens P2000 cars.

The network starts and ends with loops at Davis and at Los Santos International Airport. An extension to Vinewood is under construction. The extension tunnels can be seen on the map when at stations or when riding the tram, and can be explored.

A full loop of the arrow system takes approximately 52 minutes in real time, or 26 hours in-game.

According to a Weazel News radio segment, the Los Santos Transit Authority announced funding for a new street car project for $16,000,000,000. Rails will run on many popular streets, shutting them down for years during construction, and are promised to move traffic up to 3mph.

An announcement speaker can occasionally be heard in all stations. There are 15 quotes.[1]

Unlike taxis, the rail line operates normally in Director Mode and can be ridden by player characters. 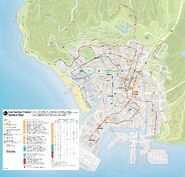 Map of all railway and tunnels in GTA V.

Visit Portola Drive
Add a photo to this gallery 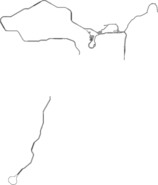 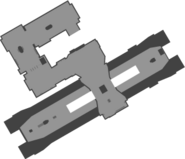 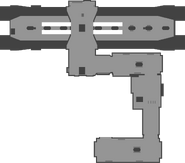 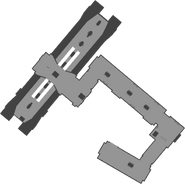 Retrieved from "https://gta.fandom.com/wiki/Los_Santos_Transit?oldid=1320012"
Community content is available under CC-BY-SA unless otherwise noted.