View source
watch 02:56
Raise a Floppa - The Loop
Do you like this video?
Play Sound
Not to be confused with Slasher or Slashers, both Adversary Modes in Grand Theft Auto Online.

There are five clues left by the Slasher that the player must find in order to find him. Approaching a clue will trigger creepy, unsettling sounds: a sound effect like a slow heartbeat, the distant pained screams of a horrified man, and unintelligible whispering along with an instruction to examine it. If using a vehicle, the player is instructed to exit it, and if necessary, move it out of the way if it's obstructing the clue. Each clue examined will reward $5,000 to the player's wallet, another $5,000 to their bank account, and 2,000 RP.

One is written on a cinderblock portion of a barn wall beneath a light at Cherry Pie Farm in Great Chaparral. The second is a severed hand located just beyond the runway northwest of the Sandy Shores Airfield, between a tire and some trash bags. The third clue is a bloody machete in a wall of a wooden barn in Grapeseed. The fourth clue is located behind the main building of Bayview Lodge in Paleto Forest; it is a shed door with a bloody handprint. These four clues can be found in any order.

The fifth clue has five possible spawn locations in Blaine County. It is a black Speedo with bloody trash bags, machetes, and meat hooks inside.

After finding the five clues, the Slasher will send a text threatening the player.

“I'm sick of you sticking your nose in where it doesn't belong! Now I'm not going to lie... what happens next... won't be nice for you.”
— Unknown

At this point, the player has to wait for the Slasher to spawn and be ready to kill him. He will only spawn in Blaine County at night, between 7 PM and 5 AM, outside of the player's field of view, and attempt to attack with his signature weapon. Arguably the best place for the player to confront him would be on the runway of Sandy Shores Airfield, as this would be a wide, flat open area with no obstructions.

The Los Santos Slasher has hunted you down. Take him out to earn a reward.

SLASHER KILLED
You now own the Navy Revolver

Get 50 kills with the Navy Revolver to earn a GTA$ reward and unlock an exclusive weapon in Red Dead Online.

Getting 50 kills with this revolver will earn the protagonist $200,000 and will also unlock the Lowry's Revolver in Red Dead Online.

Next to the train tracks in Braddock Pass, near the Braddock Tunnel (van not present).

Under the motorway in the Grand Senora Desert, near the You Tool store.

Beside a silo near the Palmer-Taylor Power Station.

In Lago Zancudo (van not present).

Next to Cassidy Creek in Raton Canyon. The Raton Canyon Bridge is visible in the background. 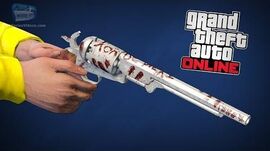