The reference to the Saints being a baseball team is in the game manual, showing the slogan "Your City's Premier Baseball Team, Until We Get A Better Offer", referencing the frequent moving professional sports teams did in the late 20th century.

The Saints play at the Los Santos Forum in East Beach, Los Santos, based on the real-life Great Western Forum (also known as the Los Angeles Forum), where the professional basketball team, the Los Angeles Lakers, played from 1967 to 1999.

The player can buy a #7 Saints jersey ($30), shorts ($60) and a chain ($25) at ProLaps. Also, Big Smoke's beta model and the statue of him in his crack palace both wear a #88 Saints jersey. Sweet Johnson is almost always shown wearing a green baseball cap with the 'LS' logo on it. The logo is almost exactly the same as the Saints' logo, implying that Sweet is wearing a green version of a Saints' hat. However, this could just be a hat representing Los Santos, not precisely the Saints themselves.

"Your city's premier baseball team, until we get a better offer". 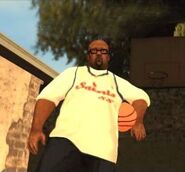 Add a photo to this gallery
Retrieved from "https://gta.fandom.com/wiki/Los_Santos_Saints?oldid=1056095"
Community content is available under CC-BY-SA unless otherwise noted.