Like the Los Angeles River upon which it is based, the LS River starts off as a natural water feature from its origins in the Tatavian Mountains to the north of the Land Act Reservoir. The river is dammed at the Land Act Dam to form the reservoir and then flows down the mountain to the source of the canal structure in East Vinewood. From there on, it is contained entirely within concrete canals.

The LS River is very large in comparison to its predecessor. The canal features more access tunnels and is much longer and more detailed. It flows north-south through East Vinewood, past Downtown Los Santos by Textile City, forms the border between South Los Santos and East Los Santos where it merges at La Mesa with a second unnamed river that has its own source to the east and from there it flows into the Pacific Ocean at the Port of Los Santos between Cypress Flats and Elysian Island. The water begins to go deeper at the elevation near Cypress Flats but up to that point most vehicles can still comfortably drive in the water without failing.

The secondary river that joins at La Mesa has its own source in Murrieta Heights. The small creek forms at the southern edge of the Tatavian Mountains in front of an overpass of the Palomino Freeway. The creek forms a small pool and flows through flood control gate structures into concrete channels. There are several maintenance crews here along with several pieces of flood control machinery. It flows in a northeast-southwest direction to its confluence point with the main river.

There is a second storm drain also referred to as the Los Santos Storm Drain. The smaller storm drain canal has no natural source and flows from the Port just west of the main river mouth, in a southeast-northwest direction between La Puerta and South Los Santos parallel to Grove Street before ending in Vespucci, where it flows directly out into the Pacific Ocean. The smaller canal probably gets its water from stormwater and sewage pipes with the main one seen at La Puerta.

In GTA V, the canal plays a large role in the game, where it is used by Michael De Santa and his crew to escape the police during the Jewel Store Heist. Later on, Michael and Trevor Philips are lead on a car chase through the canal while they attempt to catch Lazlow Jones. It is also used by Trevor, Franklin Clinton, and Lamar Davis to escape the oncoming Ballas in the mission Hood Safari. 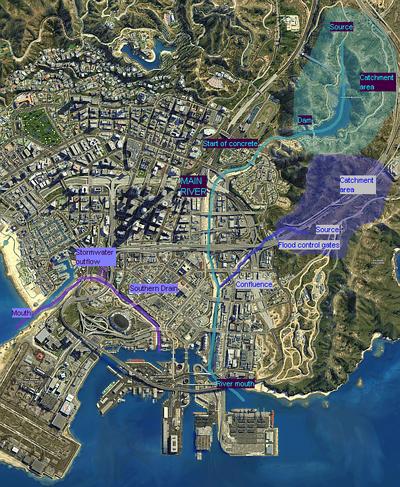 Origin north of the Reservoir.

Storm drain outlet into the river

The river eventually drops in elevation near Cypress Flats.

The drain has many steep slopes that make it unique.

Street racers at the top end.

The Los Santos Canal has people working 24/7 in order to keep it running.

Confluence of the 2 rivers.