Modeled after the Los Angeles Police Department (LAPD), the LSPD are a prominent part of the storyline in Grand Theft Auto: San Andreas.

The LSPD houses a branch known as C.R.A.S.H. (Community Resources Against Street Hoodlums, based on an anti-gang branch of the LAPD), of which officers Frank Tenpenny, Eddie Pulaski, and Jimmy Hernandez are members. Tenpenny is also represented as the main antagonistic element throughout the game's entire storyline, and he, along with Pulaski, who is also an antagonist, use their authority as LSPD officers to achieve their sinister ends.

The LSPD seems to host the only SWAT team in San Andreas as the Enforcers that appear when the player has a 4-star wanted level have LSPD markings on them regardless of the player's location. 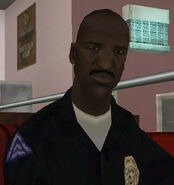 Frank Tenpenny, with the C.R.A.S.H. patch on his right arm.

The Police car is the main vehicle of the LSPD. It is a modified Premier with a custom paint job and a light bar. The same vehicle is also issued to C.R.A.S.H. members. LSPD SWAT officers respond in the Enforcer when the player reaches a 4-star wanted level. LSPD officers may be also seen using the Predator around Los Santos waters. Also, the LSPD uses Police Maverick, HPV-1000 and S.W.A.T. in the missions like Reuniting the Families and End of the Line.

Every patrol officer carries a pistol and a nightstick as their main weapons, although they will also use shotguns when the player has a 3-star or more wanted level. Additionally, officers are seen using SMGs during Reuniting the Families and Micro SMGs in End of the Line.

The department's headquarters sit adjacent to Los Santos City Hall in the Pershing Square district of Los Santos, San Andreas. This is where the player re-spawns after being arrested anywhere within Los Santos city limits.

There is another LSPD station in Verona Beach, unlike the other police stations, it does not serve as a spawn point after the player is arrested within Verona Beach.

While the LSPD does not have any jurisdiction in Red County, there is a police station just outside Los Santos in Dillimore, it shares the same interior as the LSPD headquarters, indicating it is a joint police station between the Los Santos Police Department and the San Andreas State Patrol, due to the town's close proximity.

Artwork of a LSPD Helicopter.

A police officer beating a random pedestrian, while the other officer taunts him or cheers his partner on.

A police officer beating a random prostitute, while the other officer taunts her or cheers his partner on. 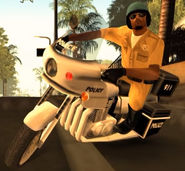 A promotional screenshot featuring an early version of a police bike officer.

A cut C.R.A.S.H. model exists in the game files. Some people think that this is a beta model of Eddie Pulaski since the model's name is csplas1. This also may be a beta cutscene model for a generic C.R.A.S.H. member since the beta LSPD officer has almost the same appearance.