“Celebrities get the best seats and came for free. The stars don't try, get paid millions of dollars and constantly go on strike. The concessions are insanely expensive. It's the true meaning of sport.”

Their home court is the Maze Bank Arena in La Puerta.

The Los Santos Panic is referred to as a 'courting disaster since 1958' on billboard advertisements.

The team is supported by the Ballas. Ballas members can be seen wearing replica playing shirts bearing the name Kazinsky and number 18.

4 player portraits, including number 18, appear on the windows of the Maze Bank Arena and number 18 also appears on billboards indicating he is a current star player.

The team is directly based on the NBA team Los Angeles Lakers, due to the purple and gold coloring and the fact that the Panic have won 16 championships as well as in identical years to the Lakers. The name may also be a reference to the many infamous and panic-triggering riots that occurred whenever the Lakers have won consecutive NBA championships, most recently in 2010.

Championship banner in a barber shop.

A billboard for LS Panic Basketball featuring one of their players, Kazinsky. (Texture file). 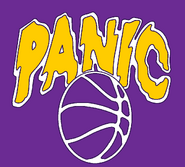 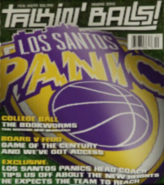 Ballas members in player replica shirt and other sports team gear including the Boars Baseball Club.