"One of the busiest airports in the world, with nowhere near enough infrastructure to support it, Los Santos International brings third-world service to first-world travel."
―Grand Theft Auto V digital manual.

Los Santos International Airport (LSIA or LSX) is an international airport located in Los Santos, to the west of the port and to the south of La Puerta in GTA V. The LSIA district is also the location of the airport's nearby warehouses, restaurants, and hotels.

Like its 3D Universe rendition, it is based on the Los Angeles International Airport (LAX).

The airport consists of three runways, one on its north-western side used for small business jets and two on its southern side used for large commercial aircraft. GTA V is the first game in the HD Universe in which players can see planes taking off and landing on their own, as well the first game in the HD universe that allows the player to fully control the large Boeing 747-inspired commercial Jets. There are also some inaccessible smaller airliners, which mix some elements between the Airbus A320 and the Boeing 737 NG, parked around the main terminal.

The aircraft seen in the airport belong to multiple distinct airlines, unlike all other airports in the series which only featured aircraft belonging to one specific airline (for example: Plummet Airlines in Escobar International or FlyUS in Francis International).

Trespassing on the runways will result in a three-star wanted level unless the player purchases a hangar as either Franklin and/or Michael, which allows the player who owns a hangar to roam around the entire airport safely (however both characters need to purchase hangars in order for both to be able to roam freely; Trevor cannot access the airport at any time without a wanted level). NOOSE has a branch based at LSX. There is high security at the entrances to the airport with CCTV and at least one armed guard at all the vehicle entrances. The entrance and approach road to the passenger terminal is patrolled by police officers, usually armed with Carbine Rifles

After obtaining The Business Update, Michael and Franklin will have full access to the airport tarmac from the beginning of the game to obtain the free vehicle available in the update.

The exterior of the airport, where the entrance to the main terminals are located, can be found northeast of the runways. It displays most of the influence in Los Angeles International Airport, with the roads layout and buildings being nearly a carbon copy of the real airport, including one extremely similar to the Theme Building and a control tower also very similar to the real one.

The two U-shaped roads, one overlapping the other in an upper floor, come from Interstate 5 and circle all the 4 main airport terminals and two large accessible parking garages. The control tower is located Between both garages. Also centered near the parking garages and the aforementioned buildings is an exterior parking lot with two AT-400-like airliners reproduced in a giant sculpture. These are surrounded by multiple light towers, based on those placed in LAX. The Opium Nights and Von Crastenburg hotels can be found north of the terminal roads.

There are four entrance gates for the airport tarmac located near the roads, which automatically open in single player when approached but are closed in Online (unless the player has a Pegasus Lifestyle Management vehicle waiting for him inside), meaning the player will have to jump across or drive through the weak fences surrounding it. There are also multiple entrances for the subway.

Overview of the exterior.

View from the Sightings Bar & Restaurant.

View from the control tower. 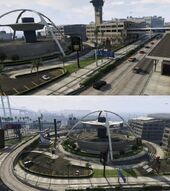 The Sightings Bar & Restaurant, with the AT-400 based statues next to it.

The lower road leading to the terminals. 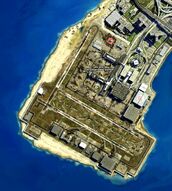 Satellite view.
Add a photo to this gallery

There are four main terminals surrounding the U-shaped roads on the northeastern area of the airport, with different airlines assigned to them. None of the main terminals have interiors and, independently from the assigned airliners, the Jets that spawn on the tarmac facet of the terminals are random.

Behind terminal 4, close to some helipads, a staircase can be climbed, which leads to a long corridor that goes directly to the terminal's roof. It has vending machines and benches where sometimes pedestrians can be found sitting. It can be a particularly good spot for hiding and resisting bounties in Online.

A smaller terminal can be found near the southern hangars of the airport, between the Concierge and Michael's Pegasus hangars. This terminal also features a small interior: By walking up on stairs behind it, a short L-shaped hallway can be accessed. Similar to the latter, it contains a few benches where two pedestrians can be found sitting, vending machines and a ladder that grants access to a hatch to the roof of the structure.

Terminal 4 as seen from the main road.

Passengers outside the terminal

Exterior of the secondary terminal, with the staircase leading up to it's small interior. 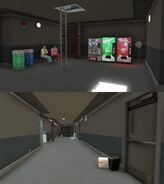 The interior of the secondary terminal.
Add a photo to this gallery

The tarmac of the airport is considerably vast, covering most of the area near the terminals. Multiple aircraft spawn in the area, such as the Jets, Shamals, a Velum and a Mammatus. Ripleys and airport buses can also be seen roaming around the tarmac and surrounding roads (See vehicles for more information).

There are three runways in the airport, two of them in the southern area for large airliners and one of them in the western area for private jets. In singleplayer, Jets often appear in the southern ones, taking off in the right and landing in the left runways. After landing, they taxi a small path and park near Franklin's hangar. Shamals and Luxors can be seen landing in the western runway, and following a taxi path to the tarmac near the main terminals.

Despite being arguably the most realistic airport in the series, the runways themselves appear to be quite small and have a lack of length for an international airport. They appear to be only 1 to 1,5 km. The tarmac is also too small to fit the Jet, having it's back and tail usually sticking out. The vehicles can't taxi through some parts of the tarmac due to lack of space in the airport itself. Making the airport look as real as possible would require a much larger amount of space, probably being twice or three times the size. Rockstar probably avoided doing this due to that the airport would possibly be bigger than a large portion of the city. The capacity of the console would be another possible reason.

Northern view, with aircraft from all four main airlines parked around the terminals.

Easterm view over the tarmac.

South view, with the private jet runway visible on the left.

The exterior of the secondary terminal.

The two main runways.
Add a photo to this gallery

There is a total of six hangars, most of them lined up together in the southern area of the airport, three of which can be entered by the player. The biggest hangar, located near one of the entrances, belongs to Devin Weston and includes a corridor with multiple stacked boxes that leads to a locker room. A forklift can be found in this same corridor. The hangar might also be used by FlyUS as the company's logo can be found on the back of it.

The other two enterable hangars, in the southern area, can be purchased by Michael and Franklin for airplanes to be stored and, when purchased by the in-game internet, spawned there. Franklin's hangar is also featured in the multiplayer mission A Titan of a Job as the location where Merryweather is keeping a Titan and Michael's hangar is featured in The Los Santos Connection where a crew is storing cocaine and vehicles. Two Stretch limos, one white and one black, spawn in front of Michael's hangar.

Overview of the south hangars.

Hangars with the FlyUS and Adios Air logo.

Franklin's hangar.
Add a photo to this gallery

The cargo bay of the airport is located in the southwest area, left of the private jets runway. It includes multiple unit loading devices stacked up together and a small inaccessible storage building. A scrapped, heavily burnt front section of a Jet can be found in the area, being a training prop for firemen as commonly found in airports, west of the fire station. There is also a radar tower near the building.

In Online, airplanes purchased in Elitás Travel and Warstock Cache & Carry spawn here if the player requests them while inside the area of Los Santos.

Overview of the cargo bay.

A Vestra spawned by calling Pegasus in Online.
Add a photo to this gallery

(As well, player's choice vehicles can be found and random vehicles parked around. At one storage depot, many black vehicles are found.)

As well as the above, the following only appear in GTA Online; some specifically for missions only or others in free roam:

The LSIA is well served by the Los Santos Transit due to how active LSIA is. There is a LSIA Parking Station provided for travellers to park their vehicles while coming into the airport or coming out. There is also the Terminal 4 Station located nearby for people trying to enter or exit the terminal grounds. Car rental companies Escalera and Touchdown are also located here.

In the game, there are usually two LSPD officers with carbine rifles and body armor guarding the airport. The LSX does not have its own police department like its counter part, LAX which is covered by the Los Angeles World Airports Police Department (LAWAPD for short), but instead are covered by the LSPD.

Roadmap of the airport.

The airport as seen from the runways intersection.

The airport terminal, as seen from the north.

Terminal seen from the south.

Passengers outside the terminal.

An airliner landing in the airport, in the beta version, as seen in Michael's trailer.

Taking Off GTAO.jpg
The main taxi zones crossing the runways

Another view of the beta airport in the same trailer. Unused airliner liveries can be seen.

A Shamal taking off from the airport.

South terminal with FlyUS Jets on it.

Opium Nights hotel, near the terminals.

An advertisement for the Sightings Bar & Restaurant at LSX, as seen in the GTAV digital manual.
Add a photo to this gallery

Retrieved from "https://gta.fandom.com/wiki/Los_Santos_International_Airport_(HD_Universe)?oldid=826036"
Community content is available under CC-BY-SA unless otherwise noted.