In addition to providing fire protection, the LSFD also provides a medical service which operate Ambulances. They also have a lifeguard division, the Los Santos Lifeguard that may be found at Vespucci and Del Perro beaches.

The LSFD shows support for the lost FDLC firefighters with an insignia appearing on the Fire Truck.

Unlike GTA IV, the fire department will respond to any fires that occur across San Andreas. The dispatch time is randomized, but Fire Trucks are defined to arrive between 20 and 30 real-time seconds in Los Santos, and 45 and 60 real-time seconds in Blaine County.[1] Various factors may cause the LSFD not to arrive, or even "terminate" their response, sometimes evident after several minutes where a Fire Truck may arrive with no sirens active. Notable scenarios in which the fire department may not respond are if the player is wanted, actively shooting a weapon, or the fire is unreachable. The presence of gangs may sometimes disturb fire fighters, particularly if they engage in the situation of a the Fire Truck driver operating the water cannon.

Upon arriving to the scene of a fire, the Fire Truck will spawn with 4 crew members on-board; the driver, a passenger, and two rear occupants hanging on the back of the truck. All passengers will exit the vehicle and approach a fire with fire extinguishers upon arrival, using the extinguishers to put out the fire. The driver of the fire truck may operate the on-board water cannon if there are multiple large vehicle fires. Weapon shots or explosions occurring while the LSFD are on scene typically results in the fire fighters fleeing the scene. An exception to using weapons applies to the Molotov Cocktail, where players can actively throw cocktails near firefighters, and they will continuously attempt to put out the fire, so long as they do not take damage from the flames. Fires occurring near ambient fire fighters, such as near fire stations, will also prompt them to approach the fire and put it out. In the case of multiple large fires, up to two Fire Trucks may arrive. A third will only show up when one of these is destroyed or leaves the scene.

All three protagonists may easily call the fire department or an ambulance by cell phone. Emergency Services is a contact found in all cell phones and the player may select that and then select "Fire department" (or "Paramedics") when the 911 operator answers. While in the dialing list, it is also possible to open the handset keypad and manually dial 9-1-1 with the same result. The appropriate apparatus will respond to the player's location within minutes.

There is only one firefighter pedestrian model in-game, which has 3 different head models, two helmets, two jackets and several accessories. LSFD firefighters wear all yellow or dark brown bunker gear with yellow and silver fluorescent strands resembling their real life counterparts in the LAFD. They also have a white nomex hood visible around their necks and wear grey or brown firefighting gloves. The fire helmets appear to be Phenix 1500's per LAFD and are either colored yellow, orange or white based on the firefighters rank: Yellow being firefighter; Orange being Captain; and White being a Battalion Chief or Commanding Officer. The firefighters helmets also sometimes have goggles on the front of the helmets.

Additionally, the player may notice some portable equipment lying around fire stations and firefighters may be seen testing and maintaining that equipment. These are merely props and are not seen interactive with.

A Caucasian fire fighter of the LSFD. (Back view)

A Latino fire fighter of the LSFD.

Alternative coat appearing in both colors.
Add a photo to this gallery
Equipment 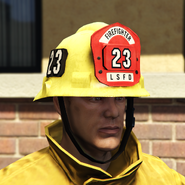 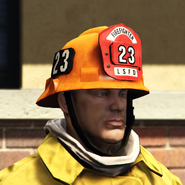 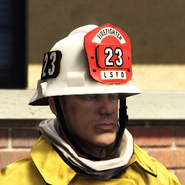 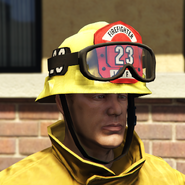 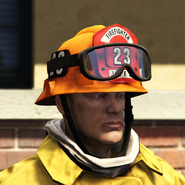 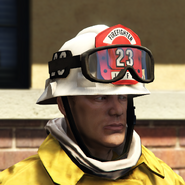 Re-breather and mask.
Add a photo to this gallery

Both the Fire Truck and Ambulance's liveries resemble a combination of the LAFD and LACoFD livery used on their apparatus.

While not directly operated by the LSFD, the LSFD appear to have a lifeguard sub-division, the Los Santos Lifeguard, evidenced by the presence of the LSFD and LSFR logo on the Lifeguard. the LSL operate the Lifeguard SUV, as well as the Blazer Lifeguard and a lifeguard variant of the Seashark.

The Police Maverick appears with an "Air Ambulance" livery. The livery bears no emblems of seals to suggest who operates the vehicle, and is presumed to be a multi-use rescue helicopter. As this livery is applied to the Police Maverick, it may appear randomly when spawning on top of police stations and, in GTA Online, on helipads of various buildings, including the Central Los Santos Medical Center. It may also appear flying around the Bolingbroke Penitentiary at night, likely a developer oversight. As the helicopter is coded to be flown by police department operatives, it is not seen flown or used by paramedics at any time.

A Police Maverick bearing an "Air Ambulance" livery.
Add a photo to this gallery

Their headquarters is the Rockford Hills Fire Station, evidenced by headquarters signage around the building.

The Los Santos Fire Department Paramedics (like the Los Santos Lifeguard) are a division of the LSFD. They can be seen standing outside their vehicles possibly taking a break or taking care of paperwork outside the hospital. Paramedics will stay there until they get a run where they will attempt to assist the patient at the point of illness or injury. If possible, the patient will climb aboard the ambulance to be driven to the nearest hospital.

As one would expect, paramedics travel in pairs in ambulances. Three variants of ambulances exist in the game. The first is the LSFD ambulance (as described earlier in the article) which is the most dominant type. The others are Los Santos Medical Center and Mission Row San Andreas. While the LSFD variant is obviously owned by the fire department, the other two are likely private companies. In fact, they could be based on Care Ambulance Service and McCormick Ambulance Service, two of Los Angeles County's biggest private EMS companies.

Paramedics wear either a dark navy blue, police-like uniform with the green medical patch (or blue medical star) symbol (LSFD), or a lighter shade of blue (hospital medics) on each shoulder. Medics also wear a belt which contain most likely more medical tools and supplies such as gauze, bandages, and surgical scissors/knives. They also wear a nametag and carry a stethoscope around their neck while wearing latex gloves due to health reasons and sanitation when performing their duties. Sometimes they are seen wearing a hat or glasses.

An African-American paramedic.
Add a photo to this gallery

The last three hospitals on this list do not serve as respawn points.

Lifeguards are another LSFD division. They have two stations-one at Vespucci and one at Del Perro Beach. They may also be found patrolling, in daylight hours only, the roads surrounding the two beaches. Their vehicles are parked at the stations and around various points on the beach but they otherwise cannot be found anywhere else.

A LSFD Firefighter putting out a fire with an extinguisher

LSFD Firefighter performing an equipment inspection at a Fire Station

The back of an LSFD Fire Coat

LSFD Firefighters riding the back step of a fire truck, something that is prohibited in the real world

Retrieved from "https://gta.fandom.com/wiki/Los_Santos_Fire_Department?oldid=1293343"
Community content is available under CC-BY-SA unless otherwise noted.