It appears to be a subsidiary of Sanitary Andreas, since both of their logos appear on their official Boxvilles and rubbish bins. However, the LSDS variant of the Boxville was removed in the enhanced version (Xbox One/PlayStation 4/PC) version of the game and can only be found in the original Xbox 360/PlayStation 3 versions.

The LSDS have a scheme set up particularly in Paleto Bay called the Los Santos Residential Recycling Program. It is most likely a recycling scheme to keep the streets tidy. 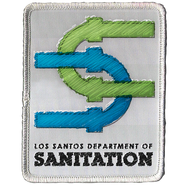 A LSDS Cans Only bin.

A LSDS Confidential Paper Only bin.

A large LSDS blue dumpster in GTA V.
Add a photo to this gallery

Retrieved from "https://gta.fandom.com/wiki/Los_Santos_Department_of_Sanitation?oldid=1217980"
Community content is available under CC-BY-SA unless otherwise noted.