“National leader in car customization, not to be confused with the lovely people who greet you with rubber gloves on arrival at Los Santos International Airport.”

“Residents of Los Santos take great pride in their cars. They spend the majority of the day in them. When you're ready to trick out your ride, visit LS Customs, because nothing says class like neon. Customized wheels, paint, body kits and more are available to make your ride your own.”

Their garages serve as a replacement for the Pay 'n' Spray shops featured in previous titles. Los Santos Customs is very similar to TransFender garages in Grand Theft Auto: San Andreas, as well as the mod shops used in Midnight Club, a video game series developed and published by Rockstar.

Los Santos Customs is an obvious parody of West Coast Customs, a business located in Los Angeles offering similar services, popularized in the MTV show Pimp My Ride. West Coast Customs was also responsible for producing the real-life Banshee as part of the game's promotion.

The player can "stalk" Los Santos Customs on the real life Lifeinvader, and will receive an in-game coupon for a free respray.

There are four Los Santos Customs garages in San Andreas, located on:

It is possible to enter all branches of Los Santos Customs (and Beeker's Garage) on foot. The Los Santos Customs branch in Harmony and Beeker's Garage can both be accessed through a small side door to the left of the vehicle entrance, while the branches in Burton, La Mesa, and Los Santos International Airport must be accessed by parking a car far enough into the entrance that the door can't close, but not so far that the cutscene of the car entering is triggered, before getting out of the car and walking in.

LSC as an Owned Property

The Harmony branch of the company is one of the properties available to be purchased by Franklin Clinton for $349,000 and generates a weekly income of $1,600. It is available to purchase after the mission Nervous Ron.

Upon purchasing the Harmony Los Santos Customs shop as Franklin, Hao will email the player regarding the purchase:

“WTF? Just heard you bought a franchise in LS Customs, man??? Crazy. Clearly your game's not as weak as I thought it was! Well I guess I can't charge you for work any more :) Just please promise me you won't make me call you boss... Say hi to that shit-talker Lamar.”

If Franklin purchases the Los Santos Customs garage on Route 68, all vehicle modifications will be free, although only at that location and only for him. However, it is still possible to take advantage of this and customize other characters' Personal Vehicles for free (e.g. Michael's Tailgater and Premier, Trevor's Bodhi, Amanda's Sentinel and Tracey's Issi). To do this, players need to acquire these vehicles as Franklin; in the case of Michael and Trevor, players will need to move them and their personal vehicle close to Franklin in the game world, before switching characters and taking the car as Franklin. Amanda's and Tracey's cars, meanwhile, can be found at the De Santa Residence.

“If you don't leave with polished chrome we didn't do our job.”

Los Santos Customs serves to provide upgrades and modifications for land vehicles. Modifications are available for both aesthetics and performance. However, care must be taken with performance upgrades as it is possible to modify some cars such that their power and torque are beyond a controllable amount; upgrading the vehicle's transmission is usually an effective counter to this. Los Santos Customs will also repair vehicles if required.

Throughout the game's progress, and as the players rank up in GTA Online, various types of car parts will be unlocked for purchase. Progressive performance upgrades are unlocked by winning races in GTA Online. There will be a small yellow star next to the category listing for any items that has been unlocked but not viewed.

Many of the modifications available for vehicles are based on real world aftermarket parts, particularly wheel rims. For example, the Endo V1 rims in the Sport section are based on VOLK TE37's, which are popular in the import scene.

†Pearlescent paint requires that a metallic paint base be applied first. A second color can then be selected under the Pearlescent option, adding a tint or hue to the car. Some combinations of colors work better than others, so some experimentation is recommended. A glitch allows pearlescent to be applied to chrome, matte and metal colours as well, along with crew, allowing for up to three different colours on a single car.

For some vehicles, further unique modifications can be applied. Examples include various truck beds on some pickups, fuel tanks, frames, sidesteps, bodywork and fenders. Some other vehicles (such as the Karin Rebel or the Declasse Tornado) feature multiple variants, with each of these variants featuring unique mods that the other(s) cannot have.

Some motorcycles have unique modification possibilities as well. Examples of these include removable fairings and assorted frames, fuel tanks, seats, rear mudguards, handlebars, mirrors and saddle bags. Additionally, the player can choose the front and rear wheel of bikes independently. However, only the rims can be changed. Selecting custom tires on motorcycles always gives them whitewall tires, similar to lowriders.

On some vehicles, the overstitches of the dashboard, steering wheel and seats matches the color applied on the rims. This modification can be seen on the Osiris and the Zentorno and some other vehicles sharing the same interior. Sometimes, primary colours affect the interior colour of a select few vehicles.

These modifications are available on all vehicles and affect their performance in some fashion.

†After title update 1.14, spoilers positively affect the vehicle's traction. Some spoilers work better than others on certain vehicles. Downforce is heavily affected by spoilers.

Los Santos Customs works in the same way in Grand Theft Auto Online as it does in Grand Theft Auto V, with the added benefit of being a chop shop. Once per in-game day (48 real time minutes), players can deliver a vehicle to an LSC garage in Free Mode and sell it, receiving a cash payout in return. Assuming vehicles are delivered in undamaged condition, players will receive a payout equaling 10% of the car's retail value (the price for the car when new). For example, a car that can be purchased for $30,000 will net the player $3,000 at LSC.

It should be noted that vehicles with a retail value in excess of $100,000 can only be sold if they were legally purchased by the player (e.g. from Legendarymotorsport.net). However, cheaper vehicles with a retail value of less than $100,000 can be stolen on the street and sold for profit. Motorcycles have a lower retail limit however. Taking a vehicle that cannot be sold to a chop shop will give the player a message that the vehicle is "too hot". There are visually modified gang vehicles that can be found in south and east Los Santos that will net a higher value payout.

Any personal vehicle purchased online and later sold at Los Santos Customs will net 50% of the new cost and 50% of the value of any applied customization. When selling any vehicle with a tracker, the money will be banked immediately, whereas selling a hot car stolen from the street will put the funds in the player's carried wallet.

In the Enhanced Version, along with the previously mentioned "gang" modified vehicles, the player can commonly see other visually-modified vehicles spawning in some locations around the map. Most of these NPC pre-modified vehicles can be sold at LS Customs for a premium price although some will still be "too hot". Currently active discounts on any of the parts used in the modifications will result in a relative reduction in the sale price.

Below is a list of vehicles in GTA Online. Note that the following values will only be given if the vehicle is in undamaged condition with no active discounts on their modification parts.

* As of Los Santos Summer Special update patch 1.51, these vehicles can enter Los Santos Customs when on the Simeon Export List but can only be resprayed (free), and using a pre-modified example does not impact the final export price at Simeon's Delivery Garage at Terminal.

The real life iFruit app allows the player to order modifications in GTA V and GTA Online, and create custom/vanity licence plates for their Online characters Personal Vehicles. A select amount of characters can be used on plates, although profane words is strangely allowed on plates.

A Sentinel being re-sprayed at Los Santos Customs.

The same Sentinel getting new wheels.

Text message when ordering through the iFruit App.

Option to purchase what was ordered through the iFruit App.

Text message when the order is automatically applied for GTA V characters' vehicles. 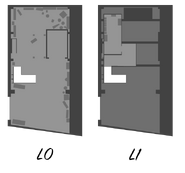