The LSSD follow a rank and structure system similar to the real world counterpart of the LASD.

Police Maverick (can be found parked on top of the Davis Sheriff's Station, used in The Paleto Score[1] and in Planning Work: Thermal Charges)

Buzzard (can be found on top of the Davis Sheriff's Station)

Nightstick (At specific locations only and in the sheriffs' belt)

Flashlight (only at night)

Micro SMG (only in The Bank Contract/Finale)

Carbine Rifle (At specific locations only)

Assault Rifle (only in The Paleto Score[2])

Los Santos County Sheriff's deputies wear a beige shirt and green pants, similar to real LASD deputies. They wear long pants with either a long-sleeve or short-sleeve shirt, where their badges are displayed on the left breast. When wearing a long-sleeved shirt, they also wear a tie. Deputies are equipped with a duty belt, which contains a radio, a pair of handcuffs, magazine pouches, and what appears to be a Glock 17. Some deputies can be seen wearing green campaign hats or brown cowboy hats, both of which feature a seven-point-star hat device, glasses, and beige body armor, which is identical to the NOOSE body armor. The shoulder patches worn by deputies appears to be a low-resolution copy of the actual LASD patch.

A Sheriff Cruiser pursuing an FQ 2 in Paleto Bay.

LSSD deputies having a conversation. 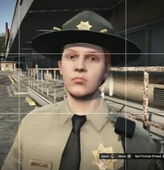 A female sheriff deputy with hat.

An LSSD deputy at the scene of a crime.

A Sheriff Cruiser joining an Interceptor during a pursuit at Del Perro Beach.