Front view of the building.

The building is bordered by Innocence Boulevard, Strawberry Avenue, Capital Boulevard and Crusade Road in Strawberry, Los Santos, just facing the Central Los Santos Medical Center. It is operated by the County of Los Santos Department of Coroner. The building is based on the Los Angeles County Coroner Office.

According to signage, the building was a hospital before it became a forensic building. On the floor at the main entrance, it reads "Los Santos General Hospital", which probably means the building was the main hospital of the district before the nearby Central Los Santos Medical Center was built.

The office's interior is accessed by Michael De Santa in the mission Dead Man Walking. IAA guards patrol the building during the mission. The interior is also accessed during Setup: Dead Courier in Grand Theft Auto Online. These are the only times the player can access the building.

The general interior layout and design is heavily based on that of the Los Angeles County Department of Medical Examiner-Coroner, presenting the same type of architecture, color, logo and even a similar unique gift shop. The locations accessible to the player during the 'Dead Man Walking' mission, are as follows:

During Dead Man Walking Michael enters the building to confirm if Mr. K, a suspected terrorist, is really dead. By entering as a widow after Dave Norton knocks him out, autopsists begin to inspect Michael's body, until Michael "wakes up", choking one of the autopsists while another flees. Michael commences a search of the building to locate Mr. K's body. After no success in finding the body, Dave tells Michael to escape the building through one of the windows. Michael jumps out of the second floor window, falling into a dumpster outside, before fleeing the area. 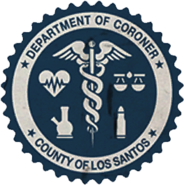 The exterior sign with Central Los Santos Medical Center in the background.

Coroner of the Year award.

Map of the interior. 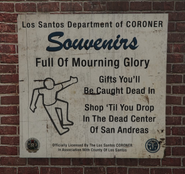 Sign found at the souvenirs building.
Add a photo to this gallery

Retrieved from "https://gta.fandom.com/wiki/Los_Santos_County_Coroner_Office?oldid=1203740"
Community content is available under CC-BY-SA unless otherwise noted.