The building is a 22+ story Art-deco-style tower just east of the Conference Center, and north of Verdant Bluffs and Los Santos International Airport.

Although the building itself is considered to be part of the Commerce district on the in-game HUD and map, the official GTA San Andreas map considers the building to be its own district, namely "City Hall", in a similar fashion to San Fierro City Hall, both on the map and in-game.

Immediately to the northeast, on the east side of Pershing Square, is the Los Santos Police Headquarters. South of the building is a row of shops, separated by a decorative alleyway with palm trees and flower beds. The main entrance is distinctive with its front porch consisting of steps leading up to tall pillars, behind which are a series of doors. Several American flags hang above the entrance. On the east and west sides of the buildings are bays with three archways consisting of windows. The main tower itself sits central on the building's base, setting the landmark's footprint. At the top of the tower, large windows mark the last of two set backs before the building is topped out with a pyramid-like roof.

Despite being a prominent landmark of the city, it plays no role in the storyline and is inaccessible to the player.

The structure closely resembles the 1928 main building of Los Angeles City Hall, located in the heart of Downtown.

Front view of the building.

Doors behind the main entrance pillars.

Alleyway at the rear side of the building.

Looking up at the tower. 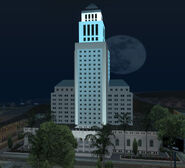 As seen at dusk.