View source
watch 02:52
Roblox: DeepWoken - The Loop
Do you like this video?
Play Sound
For the Grand Theft Auto: San Andreas rendition, see Los Santos (3D Universe)
“Imagine a city full of people ruthlessly pursuing wealth, fame and self-improvement, at any cost? Where everyone you met was either a celebrity, trying to be a celebrity, or used to be a celebrity? Where nature's bounty meant you could enjoy perfect weather all year round? Where the air was so good you could literally see and taste it? Dare to dream, because that city exists...”

Map of the City of Los Santos.

Like its real-life counterpart, Los Santos is a huge and sprawling metropolis with various different cultures, ranging from the prestigious film-making industry of Vinewood to the suburban hood life of Strawberry, just to name a few. Like Liberty City in Grand Theft Auto IV, the time and date of the city in Grand Theft Auto V is the same as the year the game was released (2013), while in Grand Theft Auto Online (set in real-life timing), the city keeps evolving and new locations are introduced with each update.

Los Santos serves as the County Seat of Los Santos County, the most developed and populated county in the southern part of the state of San Andreas.

“Welcome to Los Santos. The city of cellulose, sand, and cellulite removal. From dead starlets in Vinewood to the gangbangers in Davis and Strawberry, and terror cells in Chumash to the drunken tourists in Del Perro Pier, it's time to take a look inside this cesspit of destroyed dreams, drug-addled degenerates, and deluded desperados that make up this great city of lights.”

— Steve Haines on The Underbelly Of Paradise

Los Santos is divided into 40 districts and neighborhoods, some of which were incorporated communities that merged into the city.

Los Santos is not as renowned as Liberty City for its cityscape, but many important companies as well as government agencies FIB and IAA are headquartered here. Most of the city's high rises are located in Downtown LS, and the rest are scattered throughout the nearby districts of Little Seoul and Rockford Hills.

Los Santos, especially the northern side of the city, is praised for its high quality hotels. There are many famous hotel chains such as the one owned by the affluent Von Crastenburg Family.

Aside from houses, there are also large apartment buildings for people to live in. These buildings are typically high-end and go up to thousands of dollars in price, except the low-rise housing projects of South Los Santos.

Los Santos is not only famous for its film culture, but also its sports. There are many famous sports teams in Los Santos that have fans arguing about them on Lifeinvader.

Before the Internet age, people went to the various theatres of Los Santos to see movies. These theatres have been used since the 20th century and are what made the Vinewood film industry famous. There are also art museums and galleries located throughout LS.

Each of the incorporated cities within the Los Santos metropolitan area has a representative city hall, while the center of the government of the city is located in Alta:

There are also many tourist traps in LS. These landmarks are what gave LS a glamorous image.

Los Santos is also known for its heavy traffic congestion and a large system of freeways, interstates, and highways that run throughout the city. Commuters can be seen here day and night.

Los Santos offers a wide range of transportation, including a connected major highway system, and several other smaller highways, with several exits and on-ramps around the city. The city also has its own rapid transit system named the Los Santos Transit. Buses can also be seen spawned in traffic all around the city. Like most cities, Los Santos traffic is monitored and controlled by the Los Santos Transport Traffic Control System which allows the city to control traffic lights and manipulate conditions and the flow of vehicles on the streets and highways.

The Los Santos International Airport is located in the south eastern part of Los Santos and is the only airport in the city. The airport is a major gateway to and from several locations throughout America.

Los Santos is home to some schools and other educational institutions. The most famous one is the University of San Andreas, Los Santos, where the most privileged students attend for good careers. There is also the Los Santos Elementary for children to know the basic learning skills necessary to succeed. Sue Murry used to teach here. In the incorporated city of Davis, there is the Davis High School.

Los Santos boasts a wide variety of hospitals and medical centres. There are more high-end and affluent ones such as Mount Zonah Medical Center, while there are many cheaper ones such as St. Fiacre Hospital.

The Los Santos Police Department (LSPD) is the law enforcement agency that serves the city of Los Santos. They are based on the real life Los Angeles Police Department. Their motto is "Obey & Survive", which is inscripted on their squad cars and also reflects on their corrupt nature. Unlike the LCPD, they use newer Vapid Police Cruisers and also use the Vapid Interceptor, as opposed to the Merit-based Police Patrol, but they still use the Police Maverick as their main squad and helicopter units, respectively. The LSPD is accused of corruption and racism, much like its predecessor and the LAPD in real life.

The National Office of Security Enforcement also has a presence in the city of Los Santos, as one of its branches is located in the Los Santos International Airport area, while its main headquarters are located in the Palomino Highlands, northeast of the city. When there is dangerous criminal activity, NOOSE is deployed to the scene.

Los Santos is also known to be a one of the major hubs of organized crime and a large stronghold for the criminal underground in the United States specifically and North America as a whole. Some of the neighbourhoods in Los Santos suffer from high crime rates, specifically the southern part of the city. Since the 1990s, Los Santos is primarily affected from the drug trades between many gangs in the city. These drugs include crack, meth, and marijuana as well as a new drug called "Toilet Cleaner". Despite all the crime in Los Santos, the city still remains safer than Liberty City.

Besides the drug smuggling, the city suffers from violence, murder, and gang fighting in the southern part of the city (mainly Chamberlain Hills, Davis, and Strawberry). Most of these crimes are caused by the two long time rival African-American street gangs, The Families and the Ballas, alongside Mexican-American street gangs like the Los Santos Vagos and Varrios Los Aztecas to a large extent. They are involved in arms-trafficking as well, bringing in illegal weaponry such as Assault Rifles and SMGs.

Other than small-time street gangs, there are also influential and organized crime groups in the city. The Marabunta Grande, a powerful Salvadorian crime syndicate, are expanding their operations to Los Santos. They have fierce rivalries with other gangs all across San Andreas that are involved in the narcotics trade.

Not only is there high criminal activity, but there is also widespread corruption amongst city officials and even the police. The LSPD is known for their police brutality; there was even an instance where they shot and killed a dog. According to some sources, LSPD officers are also known for hiring prostitutes, which may explain the high presence of prostitution even in the affluent parts of the city.

When Rockstar Games started to conceptualize Grand Theft Auto V, they felt that they still had work to do in San Andreas. Dan Houser, the English Vice President of Rockstar Games along with his brother, Sam Houser, as well as the VP of Creativity, had given his idea on creating a new Los Santos this time around:

"Sam, my brother, more than anyone, but also the lead artist Aaron Garbut, were both really interested in the idea of doing a proper Los Angeles. We felt we hadn't done that with San Andreas - which were these very small, sketch like cities. Los Angeles and the surrounding countryside would be very interesting, giving us good themes to play on, and lots of good, different gameplay environments - something that allude to aspects of GTA IV and allude to some aspects of San Andreas, but still very fresh and different from the both of them."

Dan Houser also stated that, "The geography you could get outside Los Angeles is spectacular. The contrast between desert/rural Southern California, inland from L.A. and just a bit north, compared to L.A., gives you a great microcosm of red state/blue state theme - different vibes culturally as much as geographically. I think this would be good about this location."

When asked about what elements were Rockstar Games comfortable with leaving behind and what elements they wanted to preserve from San Andreas, Rockstar Games' Aaron Garbut said that they wanted the new world of Los Santos to feel "very fresh" and that their reference for the world of Liberty City in Grand Theft Auto IV "wasn't the city from the earlier games." Aaron also stated that this version Los Santos is an, "entirely fresh game world waiting to be explored and experienced."

Los Santos is heavily polluted, with smog common during the early hours of the morning. At night, the sky is commonly a dark yellow colour, especially when it is cloudy or raining. According to a radio advertisement, Los Santos was named "the most polluted city in the world" in 2013, ahead of Beijing. From 24-26 December 2013, Rockstar added snow to Grand Theft Auto Online. Snow covered the whole city and was visible from Blaine County. During this time, the days were shorter and the nights were darker, replicating a real-life winter. Snow reappears and covers the whole map for a few days every year, as part of each year's Festive Surprise event. With Los Santos not being known for snow, in universe, the appearance of it each year baffles reporters. 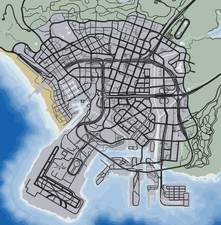 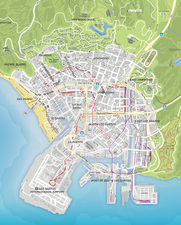 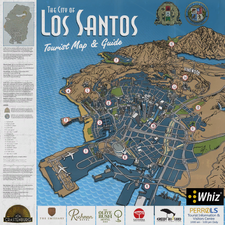 A guide to Los Santos, held by tourists. Note that this map is different than the actual game map, and has a much more exaggerated view of the city. 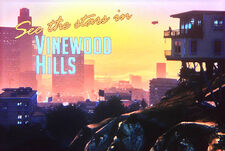 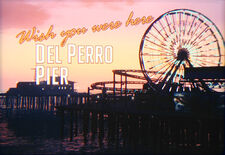 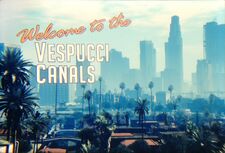 Los Santos as seen in the enhanced version trailer.

Los Santos as seen in the PC version.

Los Santos at night from Richman.

Snow in Los Santos as part of the Festive Surprise (2014 release).

Snow above Los Santos in GTA Online during a switch-screen, as part of the Festive Surprise (2015 release). 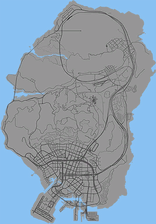