The Shitzu Longfin is a speed boat featured in Grand Theft Auto Online as part of The Cayo Perico Heist update.

The vehicle appears to be clearly influenced by the Magnum 44' luxury speed boat, seen in the sleek windshield, shape of the gunwale and the characteristic details on the sides.

The Longfin features a large profile similar to the Squalo and the Toro, where the bow is prominently elevated and features small cleats and black panels on the upper area, along with concave gunwales on the sides with additional cleats next to the windshield. The port and starboard sides make use of square windows with chrome trim around, which are always opaque. The aft of the boat makes use of a slanted transom with what looks like circular vents on either side, along with a steel duckboard on the stern. Two additional cleats can be seen on the rearmost portions of the gunwales, right above the rear vents.

The cabin area makes use of luxury details, such as the wooden flooring on the aft section and a rounded wooden panel below the windshield. What seems to be an unusable access door can be seen around the center of the boat, while the captain sits behind a dedicated black helm with the corresponding controls, with "Truck" analog dials on the upper section. Bench seats are seen through the whole aft section, finished in leather and featuring cup holders around the front, denoting its recreational purpose.

The Longfin is predictably the fastest vehicle of its class, but has a seemingly wide normal turning radius, which can be mitigated with the use of the handbrake button. The large profile also difficults the vehicle to navigate through narrow rivers and canals. Because of its high engine output, it is very prone to flip on stormy waters or if colliding with an obstacle, so it is recommended to lean forward to level the boat.

The Longfin is powered by two inboard engines, which emit a high-revving sound typical of speed boats, such as the Jetmax and the Predator.

Official screenshot of the Longfin. 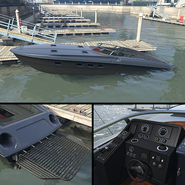 The Longfin in the cinematic preview on GTA Online Rockstar Games Social Club.

The Longfin is debut featured in The Cayo Perico Heist, owned by El Rubio's smuggling crew[1].