It is located in East Los Santos, Los Santos. The shop is next to the Tiki Theater. The front of the building has a gang tag. Products the store distributes are: tacos, huaraches, enchiladas, burritos, and tortillas. It also has its own phone number, 555-2594. The store, however, is inaccessible to the player. It plays a minor role in the mission Tagging Up Turf, where the player has to spray over the gang tag. 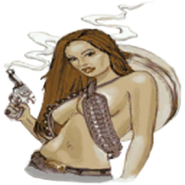 The mural painting of the market
Add a photo to this gallery
Retrieved from "https://gta.fandom.com/wiki/Lolita%27s_Market?oldid=1190120"
Community content is available under CC-BY-SA unless otherwise noted.