Lola Romero, better known as KeepItOnTheLo, is an American recording and mix engineer and Grammy award winning Chief Engineer. She appears in Grand Theft Auto Online as part of The Contract update.

Lola is an engineer working with Dr. Dre and Anderson .Paak at Record A Studios. She is first seen when the player enters the studio during Studio Time to eliminate Johnny Guns' Hired Gunmen. After the gunmen inside the studio have been eliminated, she takes part in a recording session with Dre and AP.

After the player has completed The Contract: Dr. Dre, they can enter the studio and see her at work. Usually she will just be seated at her workstation at the mixing desk. When Dr. Dre announces a recording session is in progress, she will be more animated, interacting with Dre and Anderson .Paak, moving between the mixing desk and her computer.

Lola in an official artwork. 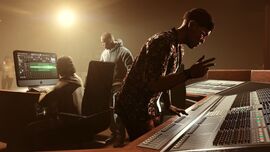 Lola in the first trailer for The Contract DLC. 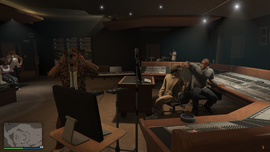 In game in a recording session. 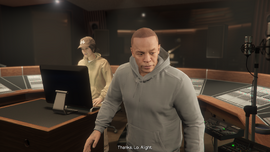