Logging On is a mission in Grand Theft Auto IV given to protagonist Niko Bellic by his cousin Roman from his cab depot in Hove Beach. The mission introduces the ability to use computers, TW@ internet cafés, and the in-game internet, and is also the first appearance of Brucie Kibbutz.

Niko enters Roman's taxi office and finds Brucie Kibbutz, a friend of Roman's, doing some exercises in a chair. After introducing Niko and Brucie to each other, Roman tells Niko that he met Brucie in an online chatroom, and is bored of not being able to email Niko too, so he asks Niko to go a Tw@ internet café and register in one of the computers. Niko reluctantly agrees.

Drive to the nearest internet café.

Go and speak to the assisstant in the cafe.

Walks inside and meet Alejandra, a friend of Roman's. She tells Niko to just go to any one of the computers and follow the on-screen instructions.

Go and use one of the computer terminals.

Log onto one of the computers and activate Niko's account by entering the EyeFind Mail Service, answering the subscription email there, either positively or negatively. 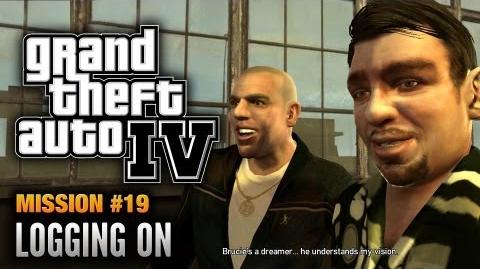 There is no monetary reward for completing this mission, though the player can now access the internet through any computer terminal, and can contact other characters through email. Niko also receives a phone call from Roman, who asks if Niko would "acquire" some cars for Brucie, unlocking the Exotic Exports side mission.