"Kapitan. I do not want to worry you, but... there is something out here. Long range scanners are picking up something... big. On the surface. From movement patterns I would say it is... never mind, it is an old friend of mine."
―Pavel spotting the monster during The Cayo Perico Heist.

Loch Ness Monster is a monster from Scottish folklore who appears as an easter egg in Grand Theft Auto Online, as part of The Cayo Perico Heist update.

In the Scottish folklore, the monster is said to inhabit Loch Ness in Scotland, where Rockstar Games originated from. It is often described as large, long-necked, and with one or more humps protruding from the water.

It is first hinted at during Heist Prep: Gather Intel if the player takes a Snapmatic photo of the sand sculpture behind the bar at the Cayo Perico Beach Party on West Beach and sends it to Pavel.

"Well now, what do we have here? Sand sculpture... but it looks familiar, no? I wonder if the people here have ever...
No, it is not possible. Not this far south. Excuse me, kapitan. I was just thinking out aloud."
―Pavel to the player when he sees a snapmatic image of the sand sculpture.

The Loch Ness Monster can only be seen during The Cayo Perico Heist finale, and appears in different spots at beginning or while escaping the island by boat. If the player get too close to the monster, it will dive down quickly. The depiction of the Loch Ness Monster resembles the popular depiction of it as a present-day Plesiosaur, with a long neck, round body and flippers to propel it through the water. The monster is technically a prop object, and cannot be killed. 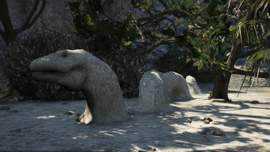 The sand sculpture of the Loch Ness Monster, found behind the bar at the beach party.
Add a photo to this gallery 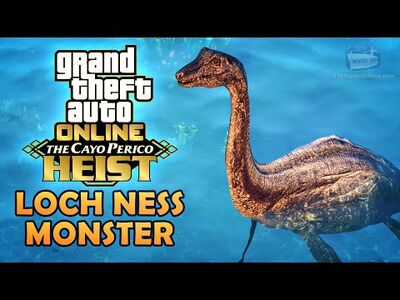 Retrieved from "https://gta.fandom.com/wiki/Loch_Ness_Monster?oldid=1302801"
Community content is available under CC-BY-SA unless otherwise noted.