Exterior of the house

Little Weasel's House is the home of Little Weasel, a member of the Ballas gang in Grand Theft Auto: San Andreas.

The house is located in the district of Glen Park, Los Santos. It appears only during the mission Doberman, in which Little Weasel is seen emerging from the house shortly before he is murdered by Carl Johnson.

Since Little Weasel had defected to the Ballas from the Grove Street Families, and Glen Park wasn't Grove Street territory before the "Doberman" mission, it is possible Weasel resided elsewhere during his time with the Families.

The interior of the house is not seen normally, and is inaccessible to the player in normal occasions. It can be however occasionally entered in the Burglar mission. Ballas gangsters (possibly Kilo Tray Ballas) can be seen staying in the living room of the house (but Little Weasel himself cannot). The house interior looks to be a middle-end house. 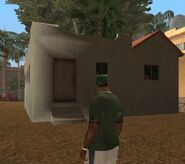 Back side and backyard 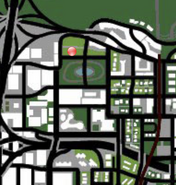 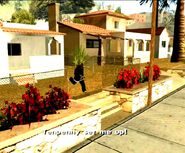 Little Weasel emerging from his house

Little Weasel running down the steps
Add a photo to this gallery
Retrieved from "https://gta.fandom.com/wiki/Little_Weasel%27s_House?oldid=1110326"
Community content is available under CC-BY-SA unless otherwise noted.