“A bustling Korean enclave packed with cafes, convenience stores, bars and mysterious businesses open 24/7 that you need to knock on a door to get into. Little Seoul is an up-and-coming neighborhood for foodies, students getting wasted on soju and gang members.”
— GTAV digital manual

The neighborhood is bordered by Rockford Hills to the north, Downtown and Strawberry to the east, Vespucci to the west and La Puerta to the south.

Little Seoul is a South Korean-influenced neighborhood, even though the Los Santos Triads have some territory in the area. Asian companies, such as Kayton and WIWANG, are headquartered here, and there are also many smaller Korean businesses and shops present, ranging from grocery stores to internet cafés to even a branch of 24-7 with a sign written in Hangul (Korean alphabet).

It is a densely populated, relatively working-class neighbourhood, with an ethnically diverse, multicultural population. Several businesses have neon signage written in Korean characters, making Little Seoul have a distinct atmosphere reminiscent of the real South Korean capital of Seoul at nighttime. 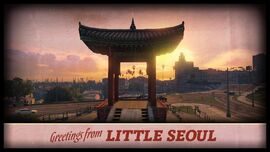 Postcard for Little Seoul, as seen in the GTA V digital manual. 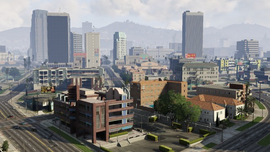