In-game time
“So what we're saying is this is a matter of security National. Normally, I don't care about cocaine, keeps controllable people in power, but this is no good.”
— U.L. Paper Contact

Liquidize the Assets is the final mission given to Niko by Jon Gravelli in Grand Theft Auto IV.

Niko meets Jon Gravelli in the hospital for the third time, but he finds U.L.P.C. companying Jon as well. Jon claims that some Russians and Ancelottis who are selling drugs have struck a business deal and he wants Niko to finish this.

Niko drives over to the compound in Alderney. He then hops over the big fence and a cutscene ensues as Niko mounts himself over the fence.

Niko then gets rid of the first few guards and a whole wave of them will come. He gains cover and guns the guards down. The player must then destroy the vans using any means necessary after taking out the thugs. If the player destroys all vans except for one that is hidden, a barely surviving Russian will enter the remaining coke van and attempt to escape with the stuff if he survives. Niko must destroy the van as it escapes in this case.

An ecstatic Jon Gravelli will call Niko once the player hops back over the fence and tell the player two things: Niko's target is entering the country and that Jon and Niko are building a very fruitful friendship. 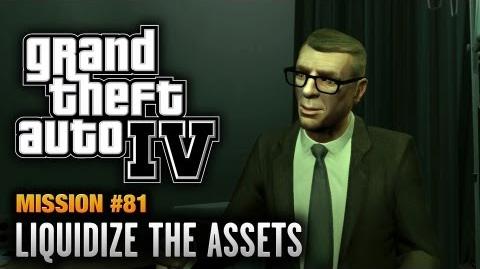