Lips 106 or Lips 106 FM is a radio station in Grand Theft Auto III and Grand Theft Auto: Liberty City Stories, it acts as a Top 40 station and plays mostly pop, among other genres.

Lips, like Head Radio, is a mainstream station that plays pop music. It doesn't feel any shame about being a commercial radio, in fact one of its idents in GTA III says "commercial radio at its best, and proud of it!" The station's headquarters can be found in Staunton Island. Its call sign is KBDDF, according to the GTA III website.

During the development of GTA Advance, Lips 106 was one of the three radio stations that was originally suppose to appear in the game (along with K-JAH and MSX FM), but was dropped.

By 2001 (the setting of GTA III), Andee is the sole DJ, and the station has switched to more of a contemporary pop mix station, with genres ranging from dance to rock to hip hop to R&B and soul. According to Andee, all of the songs now are from "the 70's to the 90's". Some lyrics were censored for profanity, most notably those from Fatamarse's "Bump To The Music" and Da Shootaz's "Grand Theft Auto".

All of the station's songs from GTA Liberty City Stories are available as ringtones in Grand Theft Auto IV.

Lips 106 is possibly based on WBLI 106.1, which plays Top 40 music in Long Island, New York, it could also possibly be based on Lite FM in New York City. Its name may also be a reference to the Kiss FM radio network name that's common through Europe and North America.

The songs in both renditions of Lips are original creations made by the Rockstar staff especially for the games.

Rockstar Games have released the entire GTA III and GTA Liberty City Stories playlists of Lips 106 on iTunes for download, including the cut song "Wash Him Off" by Marydancin[1][2]. "Sawaar" is incorrectly named in the iTunes store as "Sarwarr". 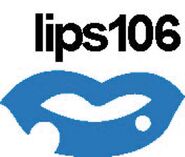