"Master of Arms" of the Lee Family
Pornographic Actress (Possibly)

None
“I could teach you a thing or two, Huang Lee.”
— Ling Shan

Ling was born in China, and has a brother named Xin. Ling Shan serves as the Master of Arms for the Lee Family, a subsect of the Liberty City Triads.

“Shit! Get us out of here alive, Huang, and I'll marry you! Yes - I know about sarcasm.”
— Ling to Huang

After Huang Lee arrives in Liberty City, he gets an order from his uncle Kenny to find a crew that was watching a group of undercover cops spying on an "exotic movie" he is financing. When Huang arrives there, he finds out that Ling was the only survivor of an LCPD attack. After a quick talk, the police arrive again and Huang loses the heat, and then drives to his apartment. Huang offers Ling "coffee" but she declines his advance. Huang then asks her whether she was an observer or actress in the movie, to which she tells him to "Keep it in your pants" and that she'll see him around. Ling then drives the car back to Wu Lee.

Ling then got an order to teach Huang combat and to wield a weapon. After doing so, they protect a shop from thugs. However, Ling is swiftly shot by one of them, and dies in an alley. An ambulance is used to transport her away at the end of the mission as depicted in a cutscene.

Viewing the note for replaying Under the Gun through a mission replay whiteboard in safehouses reveals that Huang is saddened by her death, writing that he'll miss her.

Artwork of Ling with her sword. 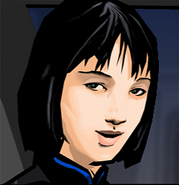 Censored version of the previous artwork.

Ling Shan in the Nintendo DS version of the game.

Dead Ling in Under the Gun.

Ling looking at Uncle Kenny. (Mission: Under the Gun)