Yes (All games)
The Linerunner is a semi-truck featured in most 3D Universe games.

The Linerunner is designed as a typical American standard cab-styled semi truck resembling a Kenworth W900L. Its name is most likely a parody of Freightliner.

The truck remains largely similar throughout its appearances, having a large front bumper with the license plate in the center and square indicators on either side, as well as a long nose with large fenders, rectangular headlights and an air filter on the driver side. The bottom features large access steps and large fuel tanks, while the cab features large mirrors on the doors, a trumpet horn on the roof, long exhaust stacks and the extended driver's cab quarter, with a single rear-facing window. The rear section mostly consists of the main chassis with a set of trailer cables above, the tail light units and the license plate. Depending on the game, there are minor cosmetic changes between each model: 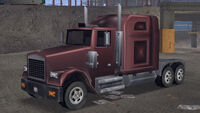 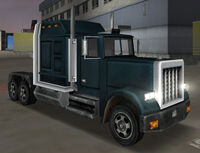 The Linerunner's performance is what would be expected for a vehicle of its size and weight, it is slow to accelerate and hard to maneuver in tight spaces, but once it gets going it has a decent top speed. Disappointingly, though, it is not quite as strong as its intimidating appearance and size would suggest, and it gets knocked around by other vehicles surprisingly easily; nevertheless, the truck proves effective breaking through police roadblocks, provided it is sufficiently speedy. The Linerunner's handling is fairly steady, but if the player does manage to roll it over, it is very difficult to get it back onto its wheels due to its height. In Grand Theft Auto: Vice City Stories, it can easily be driven and balanced on only one side, making it the easiest vehicle to get a two-wheel bonus in.

Along with the Tanker and Roadtrain, the Linerunner in Grand Theft Auto: San Andreas can be connected to a trailer in order to haul cargo, and is used in the Trucking missions; with the presence of two new semi-trucks in GTA San Andreas, the Linerunner is also revealed to be the slowest and least powerful semi-truck of the three. It is also the smallest out of the three. When attached to a trailer, its handling becomes very similar to a train, in that it will have a higher top speed (while sacrificing acceleration), and is nearly unstoppable; nothing will ever actually stop a Linerunner (or any other truck), it will just slow it down a bit.

The Linerunner is powered by a large diesel engine, which is coupled to a 5-speed gearbox and powers the rear wheels. It uses a loud diesel engine sound shared with trucks such as the Packer, the Flatbed and the Barracks OL in most games, while in GTA San Andreas, it is shared with the aforementioned semi-trucks.

The Linerunner is often common around the city's industrial districts of each game.