It starts at Calais Avenue, in front of La Puerta Apartments, crosses Palomino Avenue and ends at Ginger Street, near South Rockford Drive and Invention Court.

It is a small and short street in central Little Seoul. Despite the street's short distance, it has some points of interest and appears in some missions, such as the online missions San Andreas Seoul and Mixed Up With Coke. 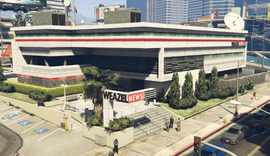 Weazel News Building, at the intersection of Palomino Avenue and Lindsay Circus. 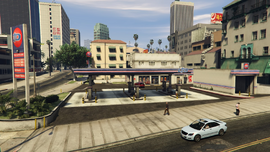 Limited Service gas station and convenience store.
Add a photo to this gallery
Retrieved from "https://gta.fandom.com/wiki/Lindsay_Circus?oldid=1134283"
Community content is available under CC-BY-SA unless otherwise noted.