Police/Government Plate - 100%
For other uses, see Lifeguard (disambiguation).
“Look the part of the beach with the rugged, dune-conquering Lifeguard from Declasse. It may not have the best acceleration, but who cares when it comes with a decorative surfboard to better establish your beach cool? And thanks to the tinted windows, you can look authoritative without having to show off that flabby beach bod.”
— Warstock Cache & Carry description.

The Lifeguard is strongly inspired by California Lifeguard vehicles, having a similar paint scheme, equipment and purpose.

The Lifeguard is a modified variant of the Granger used by the Los Santos Lifeguard to patrol the coastline of Los Santos. The overall design remained the same, but lacks a front license plate and the rear plate is directly attached to the rear bumper, while the "3500 LX" badge on the lower right corner of the rear compartment is missing due to the additional markings on the same spot. The roof features numerous equipment, including tall roof racks with an unusable surfboard and two rescue cans, as well as various antenna. The front roof rack also has a Traffic Advisor, which can be activated along with the siren when the horn button is clicked, in the same way as all emergency vehicles with lights and sirens. The Lifeguard also has Light Smoke window tint applied as default.[1]

The vehicle features a yellow body color with numerous markings around, including red "LIFEGUARD" markings around the vehicle and Los Santos Fire Department markings on the rear compartment door. Files indicate that the vehicle spawns in white, which is only visible on the inner trimmings of the doors and the engine bay. The vehicle also uses the same wheel design as the regular Granger, being a variation of the "Dune Basher" off-road rims seen in Los Santos Customs, albeit applying a slight tint/shade affected by the pearlescent color (set to yellow).

Overall, the Lifeguard has performance on par to the stock Granger, and slightly below par found on the police equivalents of the vehicle. The vehicle's handling is superior in its class, but acceleration and top speed are sluggish unlike the rest of the SUV class. The braking tends to fault, and sometimes causes the vehicle to lose some control, especially when already cornering, or attempting to recover after crashing, or even after a control-loss. Unlike the regular Granger and its law enforcement variants, the Lifeguard has a rear wheel drive layout, resulting in limited off-road performance. Also, unlike all the other variants, the Lifeguard SUV can only carry four people, including the driver, due to the roof equipment occupying the roof rails.

The vehicle is powered by what looks like a V8, however, the in-game model is a turbocharged twin-cam inline-4, with a 5-speed gearbox. It shares the same loud engine sound as the regular Granger, the BeeJay XL and the Bodhi. According to the green emblems on the rear quarters, the vehicle is a hybrid or at least fuel-efficient version of the Granger.

The Lifeguard cannot be modified in Grand Theft Auto V. However, it can in Online, although it does not have access to standard modifications. The Lifeguard is also the most expensive vehicle to insure, costing over $100,000.

A Lifeguard with lights and sirens activated. (Rear quarter view) 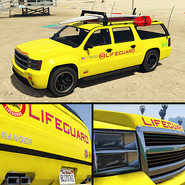 The Lifeguard on Warstock Cache & Carry.

The Lifeguard on the updated Rockstar Games Social Club.

The Lifeguard in the cinematic preview on Rockstar Games Social Club.