"Fertilizing the Truth by Natural Means."
―The newspaper slogan.

The map that accompanied the game had a map provided by the newspaper. Liberty Tree was featured prominently in Grand Theft Auto: Liberty City Stories through Ned Burner, who pretends to be a preacher. He gives missions to protagonist Toni Cipriani from a confessional box in the Liberty City Cathedral saying that they will help save him. The first mission is to retrieve a briefcase from an FBI informant before he hands it to the FBI, and then delivering it to the Liberty Tree offices. Cipriani then steals another briefcase containing diamonds, and then creates chaos on Staunton Island whilst driving a Firetruck. The final mission for Burner was killing three celebrities (Faith W., DB-P and Black Lightman) on their way to an interview with Liberty City Free Radio. Burner would report on each story: the first about an athlete on steroids, the stealing of diamonds, chaos on Staunton Island and the death of three celebrities. Burner would eventually be killed by Cipriani on orders from Donald Love, as Burner witnessed the killing of Avery Carrington. The user guide for GTA: LCS is in the form of a copy of the Liberty Tree.

Liberty Tree was first featured in Grand Theft Auto III, copies of the paper featuring Claude with a different skin featuring the now famous headline Zombie Elvis Found! can be seen among debris particles that are blown around by the wind in the game. A Liberty Tree website was used as a teaser site. Articles appeared on the characters such as Salvatore Leone, Toni Cipriani, Joey Leone, Luigi Goterelli, Donald Love, Barry Harcross and Mayor Miles O’Donovan.

According to the Grand Theft Auto IV documentary A History of Liberty City, the first edition of the Liberty Tree newspaper was published in 1835; however, citizens complained about this as they wanted less political news and more "dirty" news, like murder and rape.

Articles from the Liberty Tree newspaper can be read in the in-game Internet after some of the missions are completed: one of them even mentions a storm that hit and devastated Liberty City; others mention some of the events of the storyline, like the "disappearance" of Devin Weston.

Note: These newspaper articles can be read on the Liberty Tree in-game website.

Note: These newspaper articles are archived from the official Grand Theft Auto III website, which is no longer available.

Note: These newspaper articles can be read on the official Grand Theft Auto: Liberty City Stories website and in the game's manual.

The instruction manual of Grand Theft Auto: Liberty City Stories, fashioned as an October 1998 issue of the Liberty Tree newspaper. 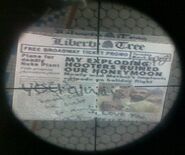 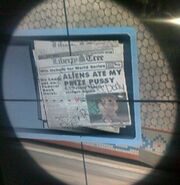 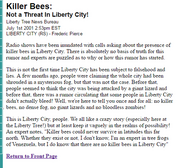 An article about killer bees in GTA III.

The advertisement in GTA IV.
Add a photo to this gallery

Retrieved from "https://gta.fandom.com/wiki/Liberty_Tree?oldid=1190662"
Community content is available under CC-BY-SA unless otherwise noted.