Iggy Pop
“This is the home of the classic raging rock.”

“The inimitable Iggy Pop, the godfather of punk and garage rock, returns with more classic raging rock for the masses.”

The station is hosted by American singer Iggy Pop. Each stand-alone game has an exclusive tracklist, but downloading The Lost and Damned for Grand Theft Auto IV updates the station with all songs.

This is one of the preferred stations of Patrick McReary, Johnny Klebitz, and Niko Bellic.

Exclusive for The Lost and Damned

Upon inspection of GTA IV's and The Lost and Damned's "american.gxt", the following songs are found, which suggests they were due to appear in the game but did not make it to the final version.

A French preview suggested that a third song by The Rolling Stones would be used on Liberty Rock Radio. However, only two tracks are present in the american.gxt file. 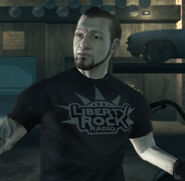 Promotional poster in The Ballad of Gay Tony as seen in Star Junction.[1](Texture)