Liberty FM is a radio station mentioned only in advertisements in Grand Theft Auto III. Liberty FM cannot be listened to, and only appears on billboards throughout Liberty City.

It is not clear whether the station was originally intended to be a ‘real’ station but was dropped during development, or if it was simply designed to sit alongside other fake brands advertised in the game. The station's genre is also unknown. 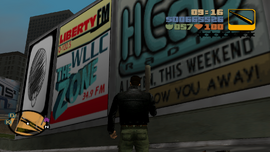 Retrieved from "https://gta.fandom.com/wiki/Liberty_FM?oldid=1184872"
Community content is available under CC-BY-SA unless otherwise noted.