The Liberty City War Memorial is the name of two monuments in Staunton Island and Shoreside Vale, in memory of a war that occurred in Liberty City, from which it is known that treatment and that it was.

The first memorial is located in Belleville Park, Staunton Island on the right of underground lavatories, which instead is an Obelisk and not a statue. This memorial has nothing relevant, but within two missions: See the Sight Before Your Flight (sight 6) where we take pictures to show a visitor to this memorial and Crazy '69' where several Forellis try to kill you.

The seond memorial is located in Francis International Airport, Shoreside Vale next to the Shoreside Terminal. Unlike the first memorial that was only an obelisk, this is formed by a bent silver soldier with a flag that can probably be that of the city and a cone head. 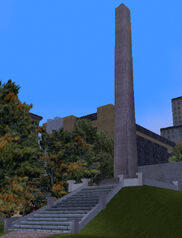 The two memorial in plaza of the Francis International Airport.

The motto written under the two memorial.
Add a photo to this gallery

Retrieved from "https://gta.fandom.com/wiki/Liberty_City_War_Memorial?oldid=1204762"
Community content is available under CC-BY-SA unless otherwise noted.