GTA Wiki
Register
Don't have an account?
Sign In
Advertisement
in: Gangs, Gangs in GTA III, Gangs in GTA Advance,
and 4 more
English

The Triads started operating in Liberty City after the Hong Kong handover in July 1997.[1]

Though the Liberty City Triads appear to be a petty street gang, it is evident that they are beginning to dabble in organized crime; including extortion, most notably that of Mr. Wong's Laundrette, which had been the source of several problems for the Leone Family, as well as pushing drugs for the Colombian Cartel via "Chunky" Lee Chong. They also own The Turtle Head Fish Factory in Callahan Point, as well as the Raffles Fish Factory. According to the Liberty Tree newspaper, some Japanese men have become part of the Triads, implying a link with the Yakuza.

As seen on a screenshot, the Triads also drove in the beta an unnamed sedan/saloon, possibly the Beamer.

They are the initial enemy of Claude, while he works for the Leone family. An all-out war between the Triads and the Leones erupted as the Triads attempted to muscle in on Leone businesses in Chinatown. The war concluded after three of the Triad warlords were assassinated and their fish factory was destroyed by a Leone truck bomb (ironically, the warehouse used to belong to the Leones until the Triads blew it up). While it is improbable that the Triads were finished in Liberty City, they were definitely weakened to a significant extent because of the loss of their most powerful asset.

Triad members wear blue boiler suits and black bandannas. In the beta releases of the game, the Triads originally wore black tracksuits with tattoos and no bandana. This was changed for the final release. They carry baseball bats or pistols. The favorite radio stations of the Triads in GTA III are MSX FM & Chatterbox FM.

The Triad gang's unnamed leader and some other gang members were killed by Toni Cipriani after his mother had assumed that he left Liberty City because he was scared of the Triads. He proved her wrong. After the Sindacco Family were forced out of Portland, the Triads became a big problem for the Leones as they started moving in on the rest of Chinatown. Massimo Torini of the Sicilian Mafia had predicted them to do so. It was part of his plan to destroy all other mob influence in Portland. Toni was sent to follow Torini through Chinatown for information, but he was spotted by the Triads, whom he killed during his escape. The Triads later retaliated by blowing up Salvatore Leone's warehouse in Callahan Point.

In GTA Advance, they wear light blue tracksuits, and they drive Mr Wongs instead of Fish Vans. The Triads are also seen in Fort Staunton and Rockford, Staunton Island.

Artwork of the Triads. 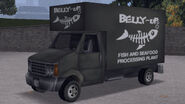 The gang's vehicle in GTA III. 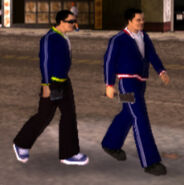 The beta version of the Triads.

Triads in the beta being ran over by the player in a black Sentinel.

Claude in the beta carjacking a Triad member. Notice the different car.

Members of the Triads in GTA Advance.