The biggest star on the Swingers is troubled star power starting pitcher Ernesto Asaltacunas, and their manager is Henry Thornsteen. Their stadium is supposedly located in the Meadows Park area in the borough of Dukes, though no stadium can be found, only two small baseball fields (which are likely not used by an apparently major team like the Swingers). A small baseball park can be found in Welham Parkway in Bohan which is sponsored (but not likely used) by the Liberty Swingers.

They seem to be an amalgam of the New York Yankees, New York Mets, and the original Brooklyn Dodgers for a number of reasons. Mostly judging by the colors and logo, which features a martini glass instead of a baseball bat, their stadium being in the Mets' location, their nickname resembling the original Brooklyn Dodgers in style and name, and having a mascot that somewhat resembles the Mets' mascot. The font is also similar to that of the Milwaukee Brewers, which is fitting, as the Swingers' logo features a martini glass, an alcoholic beverage, while a brewer is someone who makes and manufactures beer.

The Swingers are a hugely popular team, and their merchandise can be purchased on the internet, as well as seen on various pedestrians and criminals. The nickname has a double meaning, as it refers to swapping sexual partners, as well as the necessary swinging motion of the baseball bat within the sport. 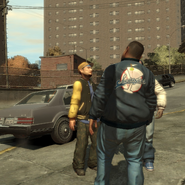 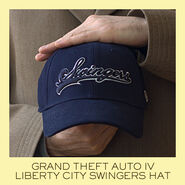 LC Swingers cap which was sold on Rockstar Warehouse.

LC Swingers shirt which was sold on Rockstar Warehouse.