The Liberty City Port Authority is a minor law enforcement agency who operate across the states of both Liberty City and Alderney. Their headquarters are located in Pier D, Port Tudor.

Their presence extends over the Broker Navy Yard (East Hook) and the Golden Pier in Algonquin, aside from the management of Port Tudor. They also have an exclusive dock (featured as the start point of the mission Babysitting) just north of the Alderney Heliport.

The LCPA logo consists of three segments depicting a stray paddle boat, an anchor, and eight maritime signal flags. A rope texture appears around the segments followed by the authority title.

The flags in the upper right part of the logo shown above spell "SWIM CANT" using the maritime signal flag alphabet, likely a reference to the majority of previous characters in the Grand Theft Auto series who were unable to swim.

It is likely based on the Port Authority of New York and New Jersey.

They appear to manage the Port Tudor complex, as there appear several "For Lease" signs with its logo in various buildings. All 40' containers have the logo in the cargo doors, showing customs and inspections control of the LCPA over transport of goods by containers.

While the authority is mentioned in numerous locations across the map, regular LCPD officers serve in their stand-in locations including small LCPA booths along the waterfront of Algonquin. That can imply the LCPA had delegated its enforcement functions to the Liberty City and Alderney corresponding law agencies. 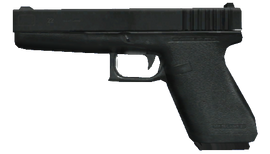 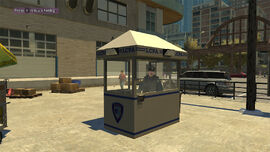 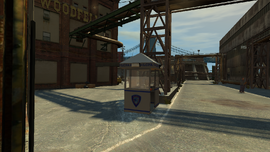 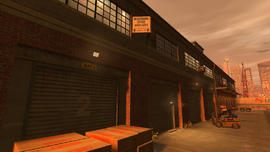 A warehouse in Port Tudor with a LCPA lease sign. 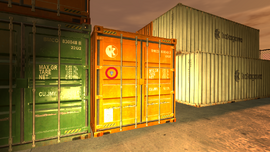 A Kakagawa container with the LCPA logo on the door highlighted. 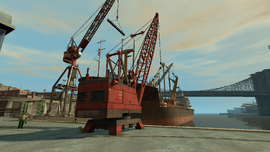 A generic port crane with the label Liberty City Port in East Hook (the ship at the bottom is the Platypus). 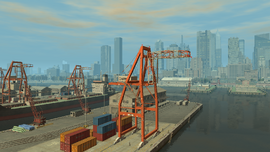