The Liberty City Police Department has around 40,000 police officers who each serve many different roles, most notably "walking the beat" on patrol all throughout Liberty City. They reign in a "complete operational" status over Liberty City, meaning they are the single law enforcement organization in the whole city even if the FIB and NOOSE are also there. The LCPD is then organized into different divisions. They include: the Highway Patrol Division, the Aviation Unit, the plainclothes Organized Crime Control Bureau and Anti-Crime Unit, the Harbor Unit, and the College Patrol Unit.

The Aviation Unit of the LCPD (formed in 2001) has a fleet of Police Mavericks which are on constant patrol. Aviation assistance can be summoned from one of the four police stations with aviation facilities. The Police Mavericks can be seen often in the skies of Liberty City, most often patrolling with Annihilators above major bridges such as the Hickey Bridge and East Borough Bridge, looking for potential sightings of terrorism.

The "College Patrol Unit" is a college type of police force whose officers are found in Varsity Heights and near Vespucci University. They patrol for any unruly behavior typical of college students, such as drinking, drug use, fights, or disturbance of the peace. However, if the player commits a crime in the vicinity, these officers will call for backup and try to arrest or kill them as normal.

The LCPD is known for their very aggressive techniques in pursuing crime, most notably saturating a high-crime area (or one or more individuals committing several crimes in short succession) with dozens of police officers and patrol cars. They take the famous NYPD rationale of having a large police presence, ensuring prevention of and a quick response to crime. In times of emergency, they respond appropriately, and pour all available resources into stopping or containing an incident, including NOOSE and/or FIB backup.

The LCPD, along with the NOOSE and the FIB, become extremely aggressive when the player is wanted and continue to use deadly force against player even after the protagonist has died and "grayed out". LCPD officers are sometimes seen writing tickets (as noticed around Middle Park and in Highway Patrol duties on the various bridges where they await speeders). LCPD officers on foot patrol are sometimes seen chasing and apprehending criminals at gunpoint; after they are cornered by the pursuing officer(s), a marked police car is contacted to take the criminal away for processing.

Despite their aggressive response if the player commits a crime, the LCPD can also assist the player if they are attacked by other NPCs. Running past a police officer while another NPC gives chase, or being hit/shot by an NPC while an officer is nearby will result in the officer attempting to take out or arrest the offending NPC, often recruiting other officers nearby in the process.

If an assailant is confirmed to commit a crime (either via being reported to the police by civilians or being directly sighted by police), or attacks a police officer responding to a 911 call, two officers from a police vehicle (and other police officers in the immediate area), wielding Pistols, will pursue the criminal and attempt to catch him. Responding officers always draw their sidearms when faced with a suspect. If there are not any criminals around, they will get back inside their cruiser and leave or, in case of officers on foot patrol, continue walking.

Unlike civilians, who report crimes via the telephone (a lengthy process), police sightings are reported immediately. Further crimes, such as attacking a police officer, and evading arrest will increase the player's Wanted Level. They can even respond to crimes out of their sight, as civilians can call the police on their cell phones to report crimes.

When the player reaches two stars, additional police vehicles are sent to the area, and the officers in the front passenger seats of the vehicles will step out wielding Pump Shotguns (if fit cops are spotted).

At three stars, the NOOSE "Immigration And Patriotism Authority" will join the fight with NOOSE Patriots and NOOSE Cruisers with LCPD officers firing on the player with shotguns and pistols, as well as a Police Maverick to oversee the scene and follow fleeing suspects. The helicopters will have two LCPD riflemen equipped with Carbine Rifles (or Advanced MGs in The Ballad of Gay Tony) and a LCPD pilot on board; the riflemen will engage the suspect on sight. The front passengers of the NOOSE patrol vehicles will also wield shotguns (if fit cops are spotted).

At four stars, instead of LCPD officers in a Police Maverick, the same helicopter is deployed with two NOOSE "Tactical Response Unit" riflemen with Carbine Rifles or Advanced MGs, and a NOOSE pilot. On the streets, the police will deploy Enforcers carrying four NOOSE Tactical Response Unit officers and/or FIB Buffalos carrying four FIB agents; both of these are equipped with body armor, Carbine Rifles, SMGs, and Pump Shotguns (as well as Assault SMGs and Automatic Shotguns in The Ballad of Gay Tony), with Pistols carried as a backup weapon.

At five and six stars, two NOOSE Annihilators are deployed carrying two NOOSE Tactical Response Unit riflemen with the same Carbine Rifles or Advanced MGs and a NOOSE pilot on board, and Enforcers and/or FIB Buffalos will continue to be sent in alongside regular police officers. Also at five and six stars, the LCPD, NOOSE and FIB will start to shoot out of their vehicles.

Two kinds of police officers tends to vary in their appearance and how they use the assigned equipments listed below:

The LCPD is large and organized, possessing 5 Borough stations and 13 Police Stations throughout Liberty City. 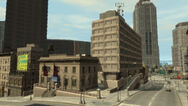 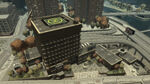 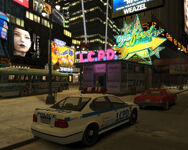 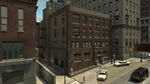 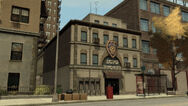 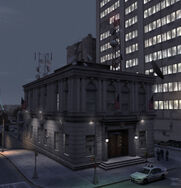 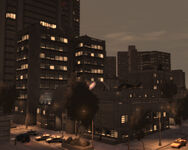 The LCPD also extends their authority in the air in GTA IV with the use of Police Mavericks, which commonly patrol the sky even when the player does not have a wanted level. Police Mavericks will occasionally join a one- or two-star wanted level when they happen to be within close proximity of the player, but the helicopter is certain to appear only when the player has a three-star wanted level with LCPD riflemen armed with Carbine Rifles and a LCPD pilot; however, at four stars, the Police Maverick will come with two NOOSE Tactical Response Unit Officers riflemen as well as a NOOSE Tactical Response Unit pilot. The Annihilator takes over from five to six stars onward with NOOSE riflemen armed with Carbine Rifles and a NOOSE pilot.

At sea, the LCPD is equipped with Police Predators, which appear when the player has three stars or more. The boats carry a police officer that pursues the player, with two police officers armed with Carbine Rifles at the back who will use deadly force against the player.

The Ballad of Gay Tony also includes two more LCPD Vehicles, the Police Buffalo (named "Police Cruiser" in-game) and the Police Bike, a police motorcycle. Neither vehicle is used by LCPD officers, and they are only available in the Multiplayer of The Ballad of Gay Tony. A third police vehicle, the Police Stinger, does not bear the LCPD's signature blue-and-white livery, but does bear the LCPD's logo. The Police Stinger is also not used by the LCPD officers in-game as a pursuit vehicle.

It should be noted that for the first time in the series, LCPD officers will not hesitate to commandeer civilian vehicles, should no police vehicles be available to them. If necessary, the LCPD will take any ground vehicle, regardless of its performance or speed. This means that if the player enters areas such as the restricted area of Francis International Airport, they may find themselves being pursued by an officer who has commandeered a Ripley or even an Airtug.

LCPD patrol cars and a blown-up NOOSE Annihilator.
Add a photo to this gallery

Weapons and other portable equipment

The LCPD Officers carry a range of equipment on their gun belts and in their cars. A collapsible baton is in place on the officers' gun belts, but the police officers do not utilize the weapon at all in-game. The baton is reinstated in the Grand Theft Auto: Chinatown Wars rendition of the LCPD. The Department-issue police firearm is the Pistol. This is used when making felony arrests, pursuing suspects and in self-defense against a deadly threat. If a police officer is disarmed, they may resort to using their fists to defend themselves. If police officers are patrolling in a Police Cruiser or a Police Patrol (patrol vehicles always have two police officers on board), and the suspect has a two-star wanted level or higher, fit police officers will carry the Pump Shotgun with eight shells in the magazine tube.

Police officers who are guarding high-security places such as the Statue of Happiness, Civilization Committee Headquarters and the Rotterdam Tower will carry Carbines, which is a good deterrent of both terrorist activity and everyday crime. Police riflemen will also carry Carbines when riding a Maverick or Annihilator, though they can also use Advanced MGs for this purpose as evidenced in The Ballad of Gay Tony. When the suspect has a five-star wanted level or more, the LCPD will deploy snipers to shoot the player with Combat Snipers from some rooftops, specifically those in Chinatown and The Exchange. Combat Shotguns are also adopted by the department, but are never seen in action. Instead, they remain inside their police cars, likely as a weapon for situations where a pistol will not be enough.

The LCPD officers also carry personal radios in order to report crimes and call for assistance and backup; they can sometimes be seen talking into them while patrolling, as can security guards.

Also, in Grand Theft Auto: Chinatown Wars, the LCPD was in a partnership with Ammu-Nation, in order to give away cash for old and/or used weapons of any type (all of those that appeared in the game) as shown in the game booklet.

Combat Sniper.
Add a photo to this gallery

The uniforms of the LCPD resemble that of the famous New York Police Department (NYPD).

An overweight female cop seen in the first trailer for GTA IV.
Add a photo to this gallery

The in-game Internet features an official LCPD website which can be found at Libertycitypolice.com. The website features a secret link at the bottom of the page to the criminal database, which contains profiles for all characters in the game. Despite being claimed only for officer use, the player does not have any kind restriction, nor causes any kind of attention.

The LCPD also set up a sting site known as Littlelacysurprisepageant.com, used to catch people attempting to access child pornography. If the website is interfaced, the player will immediately receive a five-star Wanted Level after logging off the computer.

Although the logo is based on the original NYPD, it is clearly noticeable that the LCPD is known for police brutality. In the middle of the logo, two Police Officers are shown with batons dragging a man on the floor. Below this, the scales of justice are weighing a coffee cup and a doughnut. The Alderney State police officers bear a State Police logo on their shoulder pads, the same as the NJSP; however, their vehicles and police stations reuse the LCPD logo.

Retrieved from "https://gta.fandom.com/wiki/Liberty_City_Police_Department_(HD_Universe)?oldid=1061027"
Community content is available under CC-BY-SA unless otherwise noted.