The team plays at the Liberty Memorial Coliseum (also known as Bush Stadium) in Staunton Island. They also have an official fan club whose main building is right across the stadium. Many Cocks fans can be seen walking around the Bush Stadium and some can even be heard asking others if they are a fan of the Liberty City Beavers (their fierce rivals). The Cocks and the Beavers have known meetings, implying that there is a fierce rivalry/derby. On The Tight End Zone, a program on West Coast Talk Radio, Derrick Thackery mentions a match between the two. The second occurs in September 2001, with the Cocks beating the Beavers 3-0.

In Grand Theft Auto Advance, Asuka Kasen orders Mike to injure one of Vice City Mambas quarterbacks to increases the chances of the Liberty City Cocks winning the match.

Oddly, despite the fact that the team crest and rivalry with the Beavers, plus an article from Liberty Tree, all show that they are a soccer team, the field inside the stadium and the "Two-Hand Toss" mission suggests that they play American football. This may be an oversight by Rockstar, however it is possible that the Cocks also field a football team; this is somewhat akin to the New York Giants, who shared an association with the MLB's New York Giants. Additionally, there was an American football team called the New York Yankees in the 1940s, who were owned by Dan Topping, a former part-owner of the MLB's New York Yankees.

There are still many references to the LC Cocks in the HD Universe. Eduard Borodin was visiting Liberty City to purchase the team according to an Liberty Tree internet article after the mission Paper Trail. Theres also an LC Cocks book in Luis' Apartment in The Ballad of Gay Tony. Presumably, they share a rivalry with the Liberty City Beavers as well as Red Mist XI. 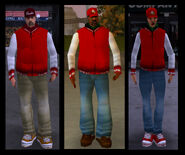 Retrieved from "https://gta.fandom.com/wiki/Liberty_City_Cocks?oldid=1246417"
Community content is available under CC-BY-SA unless otherwise noted.