The Angels of Death's Bikes and A.O.D.

In-game time
“Now business is business. And the Angels, they're the Angels. So do it for the memories.”

Liberty City Choppers is a mission in The Lost and Damned and the first mission given by Jim Fitzgerald to Johnny Klebitz.

Early on, the player will get a call from Jim, inviting them to the mission. Jim has a buyer for bikes who is interested in shipping certain kinds over to Japan. The Angels of Death, the Lost MC's major rivals, are in possession of these bikes. Jim wants Johnny to go there, steal the bikes, and load them into a flatbed truck, where the player will be able to drive them away.

The player first heads to an alleyway to get in the truck, then drives to another location to pick up the bikes. All of the AOD bikes (five in total) are parked at the Skyway Diner; the first two in the front near where the truck is parked. After those first two, however, there's some AOD resistance. Jim tells Johnny to phone either Terry or Clay for backup. They arrive on scene in short order and manage to take down a large number of the enemy bike gang's forces.

When all enemies are dead, Johnny will tell the backup that he can "lone wolf" the job from this point on. The player loads the final three bikes onto the truck and heads out, with Jim as a passenger. The player is now tasked with driving the stolen AOD bikes back to the alleyway where the truck was originally obtained. A.O.D. thugs on bikes will be in pursuit for most of the way back. Upon arriving successfully, a cutscene will play, showing two crooked LCPD officers (Ed McCornish and Jimmy Matthews) trying to blackmail Johnny and Jim into paying them off so they don't turn them in. They've been watching the Angels of Death for a while and watched all of the recent killing and thievery unfold. Once they've kicked over one of the stolen bikes and made their point clear, they leave and the mission ends.

Johnny and Jim taking the bikes back to Lost turf. 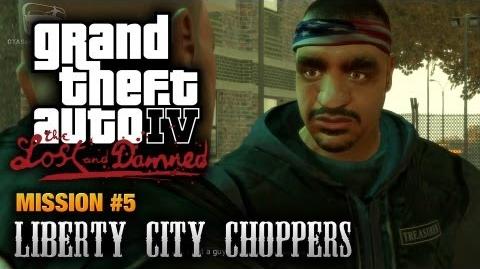