Unknown (After the motorcycles were banned from Liberty City)

The Liberty City Bikers are an outlaw motorcycle club based in Portland Island, Liberty City. Led by Cedric Fotheringay, known as Wayne, this biker gang is primarily involved in drugs and street racing. The gang is only featured in Grand Theft Auto: Liberty City Stories, mostly in missions given by Maria Latore. Wayne, the leader, sells drugs to Maria, and was also romantically involved with her.

Toni Cipriani discovers the club whilst assisting Maria, who had put herself up as first prize in a street race between gang members and Toni. It is also revealed that Wayne had abused Maria, which would prompt Toni to retaliate and kill him. Later, after Maria overdoses, she has Toni drive to Rusty Brown's Ring Donuts, an old haunt of Wayne's, thinking that a cure would be there.

The club is believed to be on very bad terms with the Avenging Angels, which leads many people to believe that the Avenging Angels are the LC Bikers' main rivals. During the Avenging Angels missions, Toni is required to kill many groups of LC Biker members. In some bike races, one of the competitors is a member of the LC Bikers. By 2001, the setting of Grand Theft Auto III, it appears that the club has in fact been wiped out due to the ban on motorcycles, and the numerous deaths of many bikers throughout the story. 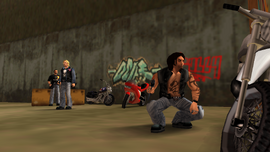