The geography of the Grand Theft Auto IV and Grand Theft Auto: Chinatown Wars renditions of Liberty City can be distinguished by its location on the east-coast of the United States of America, situated in the harbor where the West River and Humboldt River run into the land, dividing Liberty City from Alderney, and separating Liberty City into two distinctive islands; Algonquin and "The East"[1] - consisting of Bohan, Dukes and Broker.

Algonquin is the largest of Liberty City's four boroughs. It is distinguishable as a large bustling commercial/business district full of amazing towering skyscrapers and a varied composition of cultures. Some of the most high-end neighborhoods are located within Algonquin, including The Exchange, Middle Park East and Hatton Gardens. It is also home to the Star Junction district, a busy and vibrant commercial intersection composed of Burlesque and Denver-Exeter Avenue. Some of Liberty City's most iconic sights are located within Algonquin, according to Peep That Shit, including Grand Easton Terminal, Triangle Building, Zirconium Building, Middle Park and the Rotterdam Tower and its observatory deck, "The Top of The World".

Broker is the second smallest borough of Liberty City. It is situated to the south of the borough of Dukes and connected to Algonquin by the Broker and Algonquin bridges. The majority of its neighborhoods are gritty, run down, and industrial; however, in some cases, gentrification is common. In other districts, like Outlook, Rotterdam Hill, and South Slopes, a diverse upper and lower middle-class population of yuppies, immigrants, business-people, working-class, and hipsters resides.

According to the documentary A History of Liberty City on CNT, Broker is named after Sir William Broker III. He was the king's bastard son that was conceived by a milk maid.

Dukes consists of nine, large, heavily-populated neighborhoods. The character of Dukes varies considerably across its neighborhoods. It has the most green space out of all the boroughs in Liberty City which is particularly concentrated around the districts in the north of the borough such as Meadows Park, Willis, and western parts of Francis International Airport. The income of Dukes itself overall could be described as middle class, as it also could be considered the most suburban out of all four boroughs. The main urbanized district of the borough is East Island City which is centered around the Dukes Boulevard thoroughfare. It contains both modern business land use. It consists of a Bank of Liberty chain, the National Union of Contemporary Arts and the LC24 Tower in addition to declining industrial areas in the neighborhood's southern reaches and Beechwood City, which also merges with Broker. Charge Island is Dukes' other industrial centered local.

Francis International Airport is Dukes' and Liberty City's largest district, and obviously serves as the center for aviation in Liberty City.

According to the documentary A History of Liberty City on CNT, Dukes name was derived from the word dookie because the people smelled like shit.

Bohan is the smallest of Liberty City's boroughs. It appears to be the most deprived and in the state of decline, with the borough mainly consisting of run-down housing projects, pockets of small-time businesses and shops that have presumably failed shortly after their establishment. Abandoned buildings and decrepit warehouses are a common sight in Bohan, with notable examples in South Bohan and Fortside. Whilst there is often evidence of gentrification in other deprived districts across Liberty City, there is very little evidence of it in these neighborhoods with the exception of Northern Gardens. It is also home to a large industrial area, namely so, Industrial. The area consists of small warehouses and several construction sites, as well as access to small docking areas around the southern peninsular.

The population of Bohan are mainly of Latin American origin; this population trend is particularly concentrated around Puerto Rican South Bohan and Dominican Fortside. Other ethnic enclaves include the predominant African-American demographic of Northern Gardens and an Albanian presence in Little Bay.

Each of Liberty City's 56 districts is identified both on the physical copy of the GTA IV map and on the in-game HUD and map.

Unique to Algonquin, streets and avenues are assigned a grid-like system which gives many benefits, including better navigation and transport systems and provides a more effective layout for buildings and structures. The city's avenues distribute districts with smaller blocks of buildings and serve as a functional and practical way of traveling longitudinally through the island's long, narrow shape. When taking Algonquin's 25 streets and seven avenues into account, it can be calculated that there are 144 blocks in Algonquin's grid system; this does not include the minor roads that are located in and around the grid.

From east to west, Algonquin is based upon the following avenues:

Avenues in Algonquin are named alphabetically from east to west, spanning from A to G, and are named after state capitals, former of current, of the United States.

Spanning horizontally are streets. Almost all streets are 2-lane, 1-way flowing traffic lanes, with each alternating street running the opposite direction, starting with the southern-most street, Amethyst Street, flowing east, Barium Street flowing west, etc. Garnet Street, Kunzite Street, Topaz Street and the Middle Park span of Quartz Street flow on both directions. The former three are examples of 4-lane streets. Algonquin's streets are arranged alphabetically from A to X and from south to north. These streets are named after minerals.

Other named streets are named after their surroundings, passing or shape, such as Flatfish Place's proximity with the Fishmarket South district, or Cavity Lane's twisted, narrow shape within a street block. Union Drive East and Union Drive West serve as major highways on the east and west sides of the island respectively.

Connecting Algonquin to neighboring islands and boroughs are a series of bridges and tunnels. These provide a vital connection between the boroughs and can carry a large amount of traffic at once.

The following bridges and tunnels connect to Algonquin:

Traffic lights operate as intended and in accordance with the United States signalling and operation standards. When signaled red, traffic will stop, when signaled green, traffic is allowed to move, and when amber, traffic prepares to stop. Traffic lights do not flash amber in any occurrence in-game.

Most traffic signals can be destroyed, in a similar way to street lights. The main light pole itself can often be broken away from its road mounting, disabling the traffic light and producing sparks. The light will then fall and as a result, each section will break apart. AI traffic will behave as if the traffic light is still functioning and operate as normal.

Traffic signals hung from a boom are able to swing. They can be seen swinging back and forth in any weather condition, but much faster and aggressively in wind and rainy conditions.

All traffic lights systems operate at the same speed and do not consider traffic flow or congestion. A red light will take 10 seconds to change to green, and 12 seconds (including orange) to change back to red.

Various traffic light poles also have pedestrian signals attached. These iconic devices are built-in yellow boxes attached to the main pole just above human reach. On the box is a black display featuring a hand and a walking human. The hand will light up red when pedestrians are advised not to cross due to crossing traffic, and the walking human will display white when it is safe to cross.

The typical intersection layout varies by location, Algonquin being vastly different from the rest of the city. Small intersections around Broker, Dukes and Bohan usually consist of a single traffic light with the respective number of traffic signals on it, while Algonquin's grid system and repetitive string of one-way streets results in the majority of intersections consisting of three traffic lights; two single poles for two-way flowing traffic on the avenue, and a large dual-lane pole for the one-way flowing street.

As already noted, traffic behaves as expected with traffic lights, however the advanced level of AI pathing can often cause a variety of notable repercussions often caused or dependent on timing between the signal change and flowing traffic. Fast flowing AI traffic approaching a green-turning-red traffic signal will usually halt at the last minute, but depending on the speed the AI vehicle was travelling, a vehicle which stops after the stop-line often proceeds with their journey having stopped, ignoring the red light. The same occurs in the reverse situation, fast flowing AI traffic approaching a red-turning-green traffic signal will halt and continue. Traffic usually does not become inpatient with long-lasting traffic jams caused by traffic lights and vehicles will not normally jump red lights.

Taxi drivers who are told to "hurry up" by the player will jump red lights, avoiding traffic by simply driving on the other side of the road through the intersection. Distressed pedestrians will also ignore red lights, for example, if they recover a stolen vehicle from the player, or are disturbed by surrounding explosions or gunfire (unless they leave their vehicle). Responding emergency vehicles will ignore traffic lights, however their responding AI, particularly of Ambulances also often causes collisions with other vehicles, pedestrians and road-side props.

Pedestrians will also behave correctly with pedestrian signals. Approaching the crosswalk, they will only cross when the signal displays the white figure, unless distressed, or physically pushed into the road. The white figure displays when the opposing traffic flow does not intersect with the crosswalk, however, due to a minor oversight with signal behavior and limitations, the lack of a turning filter often causes traffic to almost or completely run down pedestrians when turning; this is most notable at box intersections when crossing pedestrians are safe to cross, but turning traffic makes it unsafe. Pedestrians will react to the situation, both parties often insulting each other, before carrying on with their day. This oversight is present on almost every single intersection in Liberty City.

Pedestrians will also hurry quickly when the light begins to flash (indicating that traffic will begin to start). This light flashes at the last 2 seconds of the 12 second window they have to cross. 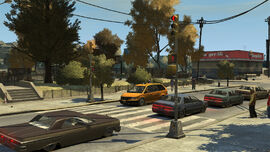 A signal-controlled pedestrian crossing in Broker. 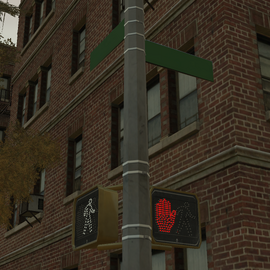 Close-up of a pedestrian lighting set up with blank navigation signs. 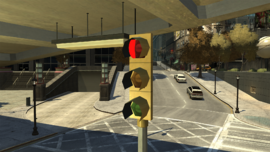 The light placement bug present on the single ped-crossing traffic lights.
Add a photo to this gallery

Retrieved from "https://gta.fandom.com/wiki/Liberty_City_(HD_Universe)/Geography?oldid=1145473"
Community content is available under CC-BY-SA unless otherwise noted.