It could be said that this city is the same as the one shown in Grand Theft Auto III and Grand Theft Auto: Liberty City Stories, as the names of the districts suggest. However, there are some differences in terms of content, for example, the Portland Island is somewhat larger and the neighborhoods of Shoreside Vale are denser than in the Liberty City from GTA III/LCS. There are also no curves, as is usual in the 2D Grand Theft Auto games. Other notable differences are that you can not use the Portland El or the Subway.

A factory in Newport. (Replaced Asuka's Condo from GTA III) 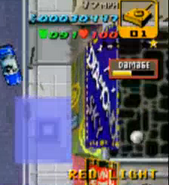 However, it is possible to recognize some locations seen in GTA III and GTA Liberty City Stories, for example the Ma Cipriani's restaurant, the Marco's Bistro, the club in Atlantic Quays, some "Video Video" stores, the Greasy Joe's Diner in Callahan Point, the Turtle Head Fishing Factory, Misty's apartment, the obelisk and underground bathroom in Belleville Park, Joey Leone's garage, the cathedral in Bedford Point, the filling station and the car crusher in Harwood.

Liberty City Cathedral
Add a photo to this gallery
Retrieved from "https://gta.fandom.com/wiki/Liberty_City_(3D_Universe)/Liberty_City_in_GTA_Advance?oldid=1147647"
Community content is available under CC-BY-SA unless otherwise noted.