Liberty City is a city featured in the original Grand Theft Auto, based on New York City. It is the first city that the player must play in before they may go on to unlock the other two cities (San Andreas and Vice City).

"The so-called "gateway to freedom", where millions of Europeans first entered the USA, is everything you imagined it could be and more. Glamorous and cynical, hard-edged and soft-livered, beautiful and damned, it is a city living on the edge. From the glamor of Island City to the down at heel bums of The Brix, this is truly the city that sleeps with one eye open. Founded on land bought from Native Americans for just $37, a barrel of mead and a sack of feathers by Belgian settlers in 1603, the ancient 5 boroughs of Liberty Island (incorporating Nixon Island and Law Island), The Brix, Estoria, Kings and Brocklyn have effectively been joined in the metropolitan area by urban areas from the neighboring state of New Guernsey.

Whether you have lived in Liberty all your life, or are visiting for the first time, there is always something new to see. From the tragedy of Law Island, where a plague out break once killed a million immigrants awaiting transfers to the mainland, to the ethnic charm of Island Heights, to the galleries and sky scrapers of downtown Island City, there is so much to see and do.

What really makes Liberty City, though, is the people who choose to live there. From plague to city-wide bankruptcy in the 1970s, from new dawns to broken promises, these people have lived through it all, secure in the knowledge that as long as they have coffee in the morning and an easy buck to make, things can't be that bad. Liberty City has acquired a terrible reputation for violent, organized crime over the years. Yet, as the mayor's office spokesman says, "Liberty City used to be a very violent place, but since we took office, it now has the 47th lowest murder rate of any cite on the eastern sea board". Nonetheless, inexperienced visitors are advised to avoid The Park at night, when drug-addled squirrels run wild, keep out of Kings at day or night, and to avoid The Brix at any given time."

Weighing against its later counterpart, the city's geography and alignment of districts in the game are much more reminiscent of New York City, featuring two major mainlands with a Manhattan-like central island named Liberty Island [1] (which contains a large park at the center, a reference to Central Park), and several smaller islands along a river of the city, with the mainlands and islands connected primarily by road bridges. Neighboring New Jersey and surrounding boroughs in New York City are also spoofed, the former described as being in a separate state (New Guernsey) of its own (similar to Alderney in Grand Theft Auto IV).

Like New York City, Liberty City is designed as heavily urbanized city with vast numbers of buildings and only a minimal number of parks and greenery. A looping train line, running along elevated and underground lines, also services locations all across the city.

Liberty City has the largest number of districts among the three in the game, with a total of 14. The districts are evidently based on real life areas in New York City, while their names are wordplay's of those from their real life counterparts: 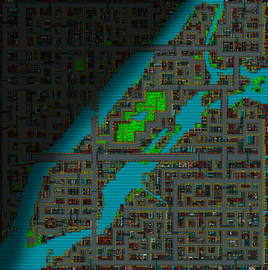 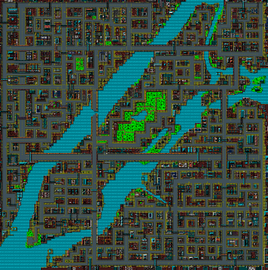