"I've got to blend in with the Angels of Death. And they're bikers. By looking like an idiot having a mid-life crisis."
―Lester Leroc to Huang Lee.

According to the LCPD Database (which lists his name as Lee Leroc), Lester is known to frequent Burger Shot restaurants and is frequently spotted wearing a "King of Rock" costume. He has been arrested on three occasions: once in 1999 for burglary, in 2003 for possession of a controlled substance (namely cocaine) and in 2004 for burglary. He may also be working as a middleman as the LCPD Database states that the Jaoming Family supply the Angels of Death with narcotics. Lester was previously married but informs Huang on one occasion that he and his wife have divorced.

In 2009, Hsin Jaoming discovers that an FIB informant is giving information regarding the Triads' activities to the authorities. Because of this, he hires Lester to discover if the informant is connected to the Angels of Death motorcycle club, who were previously allied to the Triads. A few days later, Lester e-mails Huang Lee and asks Huang to help him infiltrate the gang.

Because Lester cannot ride a motorcycle, he asks Huang to undertake the AOD's initiation test on his behalf. Wearing Lester's spare jacket and riding his bike, Huang manages to impress the gang by performing several stunts and intimidating The Lost MC into surrendering their territories. Huang later destroys the Monoglobe, which kills several Lost MC members in the process. Despite Huang, pretending to be Lester, being successful in the first test, Lester reveals that there is another, final test: selling the gang's merchandise. However, Lester had to prove himself to other members that he wasn't a "narc", leading him to drink and smoke for two days in row, making him too intoxicated to complete the final test. Huang then sells the merchandise for several potential buyers. Having passed the initiation, Lester is accepted into the gang.

Lester soon discovers that the only person within the AOD who can inform him of any potential informants within the club is Meredith, the girlfriend of chapter leader Lester Arnold. However, only senior members of the club can communicate with her. Because of this, Lester attempts to gain more credibility within the club by offering to escort a convoy carrying the club's products. Lester asks Huang for his assistance. The convoy is attacked by The Lost, but Huang manages to fend them off and the products are safely delivered, which grants Lester permission to speak with Meredith.

Meredith performs oral sex on Lester, which arouses suspicions amongst the AOD members. Suspecting that the couple have had an affair, they attempt to follow Meredith to Lester's apartment. Lester, who was close to receiving information from Meredith about a potential informant, asks Huang to prevent the Angels of Death from reaching his apartment whilst he receives information from Meredith. Huang fends off AOD members following Meredith's car, and then stands guard outside whilst Lester receives the information from Meredith. After the mission, Lester emails Huang and informs him that the informant is not within the Angels of Death. Lester thanks Huang for his help, and ends the email by telling Huang that he can call Lester at any time should be ever need assistance. 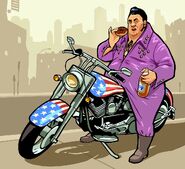 Lester on his Chopper.
Add a photo to this gallery

Retrieved from "https://gta.fandom.com/wiki/Lester_Leroc?oldid=1238316"
Community content is available under CC-BY-SA unless otherwise noted.