GTA Wiki
Register
Don't have an account?
Sign In
Advertisement
in: Homes, Locations, Locations in GTA V,
and 3 more
English

1
Not to be confused with Lester's Safehouse or Lester's Warehouse.

The property consists of a small, fully-detached bungalow-style house and an external double garage. There are multiple satellite dishes and antennae on the roof. The house is surrounded by chain-link fences with additional razor wire protection in some areas above the garage. There are two cables (one red, one blue) leading from a high voltage cabinet around the back to the front room window. The windows are all barred.

The walls of the house and yard are adorned with various warning signs. There are five external CCTV cameras attached to the house, connected to monitors located inside the house. An intercom can be found to the left of the front door. A couple of garden gnomes are outside the front door and there are two more in the back yard.

Among the warning signs there is a wooden sign saying 'Beware of Dog', and the sound of a dog barking can be heard. It appears to be a recording though, as no dog can be seen and the same sound repeats endlessly. The source of the sound appears to be two speakers attached to the wall of the house (one to the left of the front door and one at the western side of the house).

The interior is inaccessible outside of missions:

The interior is full of file boxes, computers, and surveillance equipment. Inaccessible doors are located to the left and right of the main entrance. All the doorways are wider than usual to accommodate Lester's wheelchair. From the entrance hallway, the main living space is to the northwest. On the right, there is a bed with a large screen TV at its foot and a red easy chair. All windows and other sources of natural light are covered with either blankets, wooden boards or newspaper clippings taped together. The rest of the accessible space is dominated by desks and shelving containing the computers and surveillance equipment. A small green sofa is located in the far corner.

The end of the entry hallway.

Lester with his array of computers. 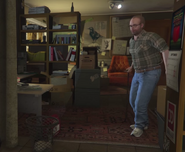 The safe inside the front door.

View of objects inside the front door.