Leonora Johnson was born on August 29th, 1952 in the Midwest. Her father, Harold was a chicken farmer and her mother, Ellen was a slopper at a dairy farm. She suffered lung problems due to heavy smoking during childhood. At school, Leonora was an unremarkable student, but hit puberty at an early age, and attracted a lot of attention from other students and the school faculty.

At fifteen years old, Leonora Johnson dropped out of high school and travelled to Los Santos by hitchhiking to escape from her uncle, and dreamt to become either a movie star or a model. After working as a waitress for several months, her natural beauty and child-like naivete caught the eye of the entertainment industry, and became a common face on the Vinewood party circuit and casting-couch circuit.

By the early 1970s, Leonora Johnson was getting regular work as a model in print ads, television commercials and minor acting roles on movies. In 1973, she got cast in Richards Majestic Productions' film "Rum Runner" in which she played Beryl, a wise-cracking disabled prostitute and stole every scene she was in. However, she was described by the media as "a pretty face to watch without perhaps much spark in the eyes", implying although she was beautiful-looking, she probably wasn't very intelligent. It was also rumored that she was considered for the female lead role in "The Many Wives of Alfredo Smith", however she was abducted, tortured, and murdered by Peter Dreyfuss in 1975.

Peter killed Leonora by mutilating her, cutting off both her hands and feet and placed them in opposite areas, cutting off several facial features, leaving multiple incisions on her breasts, drawing a star on her back with cigar burns, sliced off a portion of her thigh and wrote "ham" on it and performed intercourse on her body. As she begged to be free, Dreyfuss kept on, and she kept screaming. When Dreyfuss said to be quiet, she wouldn't, so he killed her, taking all the evidence and also clearing up the tracks so he wouldn't be caught.

On January 17th, 1975, following an anonymous tip-off to the LSPD, her body was found by the side of the Land Act Dam by the reporters, hours before the LSPD showed up trampling over all the usable forensic evidence. They couldn't find any form of evidence to figure out who killed Johnson, so the case was closed shortly afterwards.

After Leonora's death, Peter Dreyfuss taunted her family for years by sending letters, making anonymous phone calls, and sending Leonora's locket and her severed lips on the anniversary of the murder. According to some other rumors/reports, he had also stalked her for years before actually abducting her and raping her, though this was not confirmed by himself.

More information about Johnson's murder can be found the in-game website www.whokilledLeonoraJohnson.com. According to the official site of her murder, a pornographic version of her assassination was produced in 1984. The movie was called "Lay Enormous Jonhson" and Leonora was portrayed by Jessica Barlow, a person who claimed to be "Leonora's best friend at high school" although Leonora's parents had no idea who she was.

The story was also featured in an episode of The Underbelly Of Paradise.

There is a series of 50 scraps of a torn-up letter that Peter had sent to a friend, David Richards, in 1975, shortly after Leonora's murder, confessing his crime and justifying his actions artistically. After finding all the letter scraps, the player will see the entire letter, and then the "Strangers and Freaks" mission A Starlet in Vinewood will be unlocked for Franklin, in which he scares Dreyfuss with that letter, and vigilante justice against Dreyfuss is optional. 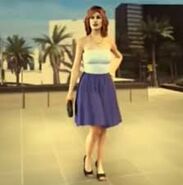