Leo Brodell is, in 2008, a Jamaican criminal in Liberty City.

He is wanted by the LCPD for drug trafficking. He can be killed by Niko Bellic. He smokes and uses a Pump Shotgun when being confronted in his apartment building in East Holland. Several other target associates will also be present in the building with two on the roof. He uses a generic Jamaican Yardies character model and his outfits are randomized. 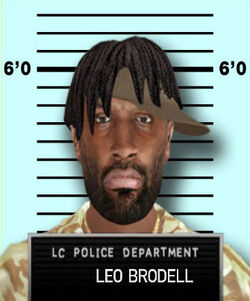 Leo and an associate in the stairwell.

The last associate on the rooftop.

Leo, after firing his Shotgun at Niko.